Thinking You ‘Have Plenty’ Often Leads to the Danger of Complacency 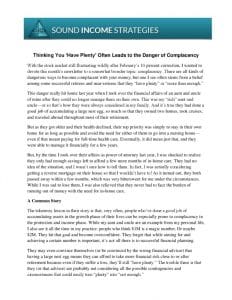 With the stock market still fluctuating wildly after February’s 10 percent correction, I wanted to devote this month’s newsletter to a somewhat broader topic: complacency. There are all kinds of dangerous ways to become complacent with your money, but one I see often stems from a belief among some successful retirees and near-retirees that they “have plenty” or “more than enough.”

This danger really hit home last year when I took over the financial affairs of an aunt and uncle of mine after they could no longer manage them on their own. This was my “rich” aunt and uncle—or so that’s how they were always considered in my family. And it’s true they had done a good job of accumulating a large nest egg, so much so that they owned two homes, took cruises, and traveled abroad throughout most of their retirement.

But as they got older and their health declined, their top priority was simply to stay in their own home for as long as possible and avoid the need for either of them to go into a nursing home—even if that meant paying for full-time health care. Eventually, it did mean just that, and they were able to manage it financially for a few years.

But, by the time I took over their affairs as power of attorney last year, I was shocked to realize they only had enough savings left to afford a few more months of in-home care. They had no idea of the situation, and I wasn’t sure how to tell them. In fact, I was actually considering getting a reverse mortgage on their house so that I wouldn’t have to! As it turned out, they both passed away within a few months, which was very bittersweet for me under the circumstances. While I was sad to lose them, I was also relieved that they never had to face the burden of running out of money with the need for in-home care.

The takeaway lesson in their story is that, very often, people who’ve done a good job of accumulating assets in the growth phase of their lives can be especially prone to complacency in the protection and income phase. While my aunt and uncle are an example from my personal life, I also see it all the time in my practice: people who think $1M is a magic number. Or maybe $2M. They hit that goal and become overconfident. They forget that while aiming for and achieving a certain number is important, it’s not all there is to successful financial planning.

They may even convince themselves (or be convinced by the wrong financial advisor) that having a large nest egg means they can afford to take more financial risk close to or after retirement because even if they suffer a loss, they’ll still “have plenty.” The trouble there is that they (or that advisor) are probably not considering all the possible contingencies and circumstances that could easily turn “plenty” into “not enough.”

Perhaps the most common of those circumstances is the one that almost caught up with my aunt and uncle: healthcare expenses that greatly exceed what you’ve planned for. Many people—and even some advisors—fail to recognize or consider that healthcare costs increase at a faster and steeper rate than general inflation. Since 1948, the price of medical care has grown at an average annual rate of 5.3 percent compared to 3.5 percent for the consumer price index overall.1

So, at close to six percent, healthcare and medical costs are essentially doubling every 12 years. That means if a couple in their 60s is budgeting $200K for annual full-time in-home health care today, by the time they’re in their late 80s or early 90s, those expenses could be four times as high—as much as $800K a year. And, even if they’re projecting an increase based on the standard inflation rate of 3.5 percent, they’re still going to fall short.

Oh, and by the way: according to the Centers for Disease Control, for a couple in their 60s today, there is a 50 percent chance that at least one of them will live into their 90s. Those kinds of longevity rates are becoming increasingly common—which is another issue some people who think they “have plenty” often overlook or try to minimize.

I’m sure my aunt and uncle probably didn’t expect to live into their 90s while they were traveling and enjoying their early years of retirement in their 60s, and yet they both did. And even if they did foresee it, I’m sure they optimistically saw themselves being independent and in good health right to the end. I doubt they envisioned the need for full-time in-home care or expected that it would cost over $200K a year when it cost less than $50K 30 years earlier.

But, again, their situation is typical. Longevity and rising healthcare costs can trip up a couple with a large nest egg even if they think that they’re not being complacent and that they’ve planned for every contingency.

Let’s take a hypothetical example: A couple in their 60s has about $1M in assets in an IRA specifically earmarked for long-term home health care. They believe it’s “plenty,” thinking they can cover five years of full-time in-home healthcare expenses and maybe more based on the IRA’s future growth. Ah, but not necessarily when you factor in Required Minimum Distributions. RMDs start right off at 3.65 percent at age 70 and a half and hit nearly 9 percent by the time you’re 90.

If that couple doesn’t have a strategy that allows them to satisfy RMDs from interest and dividends, there’s a good chance they’ll have to draw down much of the IRA principal to satisfy the RMDs—which is a slippery slope after retirement. So, rather than growing, that $1M could be worth $500K or less by the time they reach 90, leaving them less than enough to pay for one year of full-time in-home health care.

Again, I’ve seen this kind of thing happen at a very personal level now, and it reinforces one of my strongest convictions: To be truly successful at financial planning, you need to approach it (or have an advisor who approaches it) with the skills and mindset of a chess grandmaster. A very good chess player typically sees two to three moves ahead on a chessboard, while a grandmaster sees seven moves ahead—and, thus, is far less likely to ever fall victim to complacency!