Ongoing Crisis Illustrates Exactly Why Protection Should Be Priority Number One 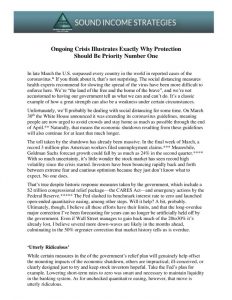 In late March the U.S. surpassed every country in the world in reported cases of the coronavirus.* If you think about it, that’s not surprising. The social distancing measures health experts recommend for slowing the spread of the virus have been more difficult to enforce here. We’re “the land of the free and the home of the brave”, and we’re not accustomed to having our government tell us what we can and can’t do. It’s a classic example of how a great strength can also be a weakness under certain circumstances.

Unfortunately, we’ll probably be dealing with social distancing for some time. On March 30th the White House announced it was extending its coronavirus guidelines, meaning people are now urged to avoid crowds and stay home as much as possible through the end of April.** Naturally, that means the economic shutdown resulting from these guidelines will also continue for at least that much longer.

The toll taken by the shutdown has already been massive. In the final week of March, a record 3 million-plus American workers filed unemployment claims.*** Meanwhile, Goldman Sachs forecast growth could fall by as much as 24% in the second quarter.**** With so much uncertainty, it’s little wonder the stock market has seen record high volatility since the crisis started. Investors have been bouncing rapidly back and forth between extreme fear and cautious optimism because they just don’t know what to expect. No one does.

That’s true despite historic response measures taken by the government, which include a $2 trillion congressional relief package—the CARES Act—and emergency actions by the Federal Reserve.***** The Fed slashed its benchmark interest rate to zero and launched open-ended quantitative easing, among other steps. Will it help? A bit, probably. Ultimately, though, I believe all these efforts have their limits, and that the long-overdue major correction I’ve been forecasting for years can no longer be artificially held off by the government. Even if Wall Street manages to gain back much of the 20to30% it’s already lost, I believe several more down-waves are likely in the months ahead, culminating in the 50% or greater correction that market history tells us is overdue.

While certain measures in the of the government’s relief plan will genuinely help offset the mounting impacts of the economic shutdown, others are impractical, ill-conceived, or clearly designed just to try and keep stock investors hopeful. Take the Fed’s plan for example. Lowering short-term rates to zero was smart and necessary to maintain liquidity in the banking system. As for unchecked quantitative easing, however, that move is utterly ridiculous.

I believe the overuse of QE ever since the Financial Crisis is responsible for much of the economic instability in the world today; using more now isn’t going to fix anything—certainly not in this situation. Easing is all about flooding the market with cheap money for consumers and businesses to spend because that’s how you jumpstart the economy, according to all the textbooks. However, the textbooks fail to address one important question: what if nobody spends the money? What if they save it or pay down debt because they’re too scared to spend? That’s the fatal flaw in quantitative easing. We saw it demonstrated through three rounds of QE during the long, slow recovery from the Great Recession, and I believe we’ll see it again in this instance.

This same flaw exists in the main component of the CARES Act: mailing one-time $1,200 checks to millions of workers below a certain income level. For workers who have already lost their jobs, that money will probably be used to pay essential bills. But even for those fortunate enough to still be working, how likely are they to spend their check on something that really helps the struggling economy? How much more likely are they to save it or pay down debt because they’re afraid things are going to get worse? Again, it’s the same flaw at the heart of quantitative easing, and it won’t really help the economy. Nor will it fool Wall Street enough to stave off a major correction—not this time!

Why Protection is Priority Number One

With all this said, it’s important to keep in mind that this crisis offers a perfect illustration of why I believe it’s so important for investors in or nearing retirement to reduce their stock market risk by switching their strategic focus from growth to income. If you are investingforincome, odds are your portfolio has seen less negative impact so far than if you were still invested in stock-based strategies. Yes, the bond market has been rocked by this crisis too, with yields at historic lows, but remember three things. First, any insured items in your portfolio (such as CDs, annuities and government bonds) have not been adversely affected by market volatility. Second, non-insured items such as corporate bonds and bond-like instruments may be down in value on your statement, but the dollar amount of your income hasn’t changed. Finally, the loss is only a paper loss because these instruments have a par value that guarantees your investment will be paid back in full whenever the bond gets called or paid off, provided there is no default.

While the current economic crisis may increase the risk of default for some companies, I don’t see it as a significant risk in our portfolios. What’s more, actively managed income strategies like ours make it possible for account managers to continually minimize that risk while also taking advantage of new opportunities—and such opportunities are, in fact, emerging as a direct result of the coronavirus crisis, even amid all the challenges.

Keep all this in mind each time you get your statement in the months ahead. Even if values on your bond and bond-like instruments drop further in April than they did in March, your interest and dividend payment (your income) and your par value on most holdings haven’t changed. At the same time, if you do have questions or concerns about anything in your portfolio, reach out to my office so we can schedule a meeting—by phone, of course. Most importantly, do all you can to stay safe and healthy as we all work through this crisis together!