Fed Walks a Tightrope in Efforts to Normalize Without Pain 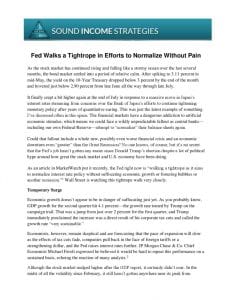 As the stock market has continued rising and falling like a stormy ocean over the last several months, the bond market settled into a period of relative calm. After spiking to 3.11 percent in mid-May, the yield on the 10-Year Treasury dropped below 3 percent by the end of the month and hovered just below 2.90 percent from late June all the way through late July.

It finally crept a bit higher again at the end of July in response to a massive move in Japan’s interest rates stemming from concerns over the Bank of Japan’s efforts to continue tightening monetary policy after years of quantitative easing. This was just the latest example of something I’ve discussed often in this space. The financial markets have a dangerous addiction to artificial economic stimulus, which means we could face a wildly unpredictable fallout as central banks—including our own Federal Reserve—attempt to “normalize” their balance sheets again.

Could that fallout include a whole new, possibly even worse financial crisis and an economic downturn even “greater” than the Great Recession? No one knows, of course, but it’s no secret that the Fed’s job hasn’t gotten any easier since Donald Trump’s election despite a lot of political hype around how great the stock market and U.S. economy have been doing.

As an article in MarketWatch put it recently, the Fed right now is “walking a tightrope as it aims to normalize interest rate policy without suffocating economic growth or fostering bubbles or another recession.”1 Wall Street is watching this tightrope walk very closely.

Economic growth doesn’t appear to be in danger of suffocating just yet. As you probably know, GDP growth for the second quarter hit 4.1 percent—the growth rate touted by Trump on the campaign trail. That was a jump from just over 2 percent for the first quarter, and Trump immediately proclaimed the increase was a direct result of his corporate tax cuts and called the growth rate “very sustainable.”

Economists, however, remain skeptical and are forecasting that the pace of expansion will slow as the effects of tax cuts fade, companies pull back in the face of foreign tariffs or a strengthening dollar, and the Fed raises interest rates further. JP Morgan Chase & Co. Chief Economist Michael Feroli expressed he believed it would be hard to repeat this performance on a sustained basis, echoing the reaction of many analysts.2

Although the stock market nudged higher after the GDP report, it certainly didn’t soar. In the midst of all the volatility since February, it still hasn’t gotten anywhere near its peak from

January 26, when the Dow Jones Industrial Average hit 26,616. As I’ve explained before, this is because the value of Trump’s tax cuts has already been factored into the market. Wall Street basically needs the GDP to keep hitting four percent or higher in order for growth to catch up with overvalued stock prices. If that level of growth really isn’t sustainable (as most economists believe), then the only way for the market to make fundamental sense again is for stock values to shrink down to align with corporate earnings. Translation: another major market correction.

This brings us back to the Fed’s tightrope act. In their most recent meeting, Fed Chairman Jerome Powell vowed to continue their gradual pace of interest rate hikes, which are supposedly aimed at keeping the economy from overheating. In reality, another important reason for raising rates is so the Fed has some ammunition to lower them again in case of another recession. Yet, moving too fast with rate hikes has the potential to stall growth—in part by continuing to flatten the yield curve.

As I mentioned above, despite nudging closer to 3 percent again in late July, long-term interest rates on the 10-Year Treasury yield have remained stubbornly low despite the Fed’s efforts since October to manipulate them upward with the unwinding of our own quantitative easing program. With the Fed funds rate already at 2 percent, hiking short-term rates further will continue to flatten the yield curve, which—as I’ve explained many times—hinders one of the most essential elements of economic growth: lending and borrowing.

As long as long-term rates remain stuck below 3 percent, the Fed’s tightrope walk will be a tricky one. I believe long-term rates will continue hitting a strong resistance level at just below or above 3 percent for a number of reasons.

Making the tightrope walk even trickier is the fact that Trump openly criticized the Fed’s rate-hike policy in a tweet last month. This was a stunning break from historical precedent that some experts believe could shake investor confidence in the Fed’s independence. They believe the Fed may feel compelled to restore that confidence by increasing rates more aggressively in defiance of Trump’s criticism despite the risk of stalling growth. “If anything, the incentive will be to tighten more, not less, because of this political pressure,” said former Fed economist Roberto Perli.3

Whether that proves to be true or not, many experts continue to maintain that the effort to wean the economy off cheap money and normalize monetary policy again isn’t going to happen without some pain—pain that could come in the form of a third major stock market crash, an economic recession, and possibly another full-fledged financial crisis. Do you feel prepared?