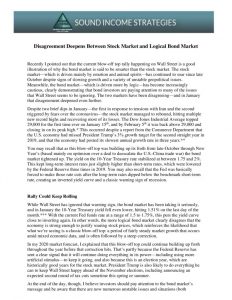 Recently I pointed out that the current blow-off top rally happening on Wall Street is a good illustration of why the bond market is said to be smarter than the stock market. The stock market—which is driven mainly by emotion and animal spirits—has continued to soar since late October despite signs of slowing growth and a variety of unstable geopolitical issues. Meanwhile, the bond market—which is driven more by logic—has become increasingly cautious, clearly demonstrating that bond investors are paying attention to many of the issues that Wall Street seems to be ignoring. The two markets have been disagreeing—and in January that disagreement deepened even further.

Despite two brief dips in January—the first in response to tensions with Iran and the second triggered by fears over the coronavirus—the stock market managed to rebound, hitting multiple new record highs and recovering most of its losses. The Dow Jones Industrial Average topped 29,000 for the first time ever on January 15th, and by February 5th it was back above 29,000 and closing in on its peak high.* This occurred despite a report from the Commerce Department that the U.S. economy had missed President Trump’s 3% growth target for the second straight year in 2019, and that the economy had posted its slowest annual growth rate in three years.**

You may recall that as this blow-off top was building up its froth from late-October through New Year’s (based mainly on optimism over a deal to deescalate the U.S.-China trade war) the bond market tightened up. The yield on the 10-Year Treasury rate stabilized at between 1.75 and 2%. This kept long-term interest rates just slightly higher than short-term rates, which were lowered by the Federal Reserve three times in 2019. You may also recall that the Fed was basically forced to make those rate cuts after the long-term rates dipped below the benchmark short-term rate, creating an inverted yield curve and a classic warning sign of recession.

While Wall Street has ignored that warning sign, the bond market has been taking it seriously, and in January the 10-Year Treasury yield fell even lower, hitting 1.51% on the last day of the month.*** With the current Fed funds rate at a range of 1.5 to 1.75%, this puts the yield curve close to inverting again. In other words, the more logical bond market clearly disagrees that the economy is strong enough to justify soaring stock prices, which reinforces the likelihood that what we’re seeing is a classic blow-off top: a period of fairly steady market growth that occurs amid mixed economic data, and is often followed by a steep correction.

In my 2020 market forecast, I explained that this blow-off top could continue building up froth throughout the year before that correction hits. That’s partly because the Federal Reserve has sent a clear signal that it will continue doing everything in its power—including using more artificial stimulus—to keep it going, and also because this is an election year, which are historically good years for the stock market. President Trump is also likely to do everything he can to keep Wall Street happy ahead of the November elections, including announcing an expected second round of tax cuts sometime this spring or summer.

At the end of the day, though, I believe investors should pay attention to the bond market’s message and be aware that there are now numerous unstable issues and situations (both economic and political) that could trigger the next sustained market correction. This could happen despite any artificial stimulus efforts by the Fed, despite what happens in the presidential election, and despite the economy maintaining moderate growth. In fact, that would even make sense since stock values and the GDP are so out of whack to begin with. As I’ve explained before, historically, a major correction is precisely how the markets are forced to make fundamental sense again.

As I also noted in a previous newsletter, the most important questions for everyday investors over 50 to keep in mind as this blow-off top continues to build up froth are: “Is this real, and if not, do I really want to bet on something that’s artificial?” Now, a market speculator might actually answer “yes” to that question. He might decide it makes sense to stay in the market but with one finger on the trigger, ready to pull out quickly when reality hits and that huge sustained sell-off begins.

However, if you’re not a speculator, if you’re an everyday investor who is retired or within ten years of retirement, then in my experience you probably don’t want to bet on something that isn’t real. You don’t want to play that game because you know that even if this blow-off top adds another 20% growth, that’s hardly worth the risk of a 40 to 70% loss—which is what history suggests the next correction could be.

Also, most rational people do already recognize that the market is fundamentally out of whack with reality in many ways. Wall Street’s latest round of irrational exuberance doesn’t pass their sniff test, and they’ve wisely taken steps to reduce their risk. If, however, you have friends or family who are still caught up in the hype, you might want to let them know that now is an ideal time to reduce their own market risk by switching their strategic focus from growth to income. With the rally still going, they can still cash out while they’re ahead—but that situation could change quickly!