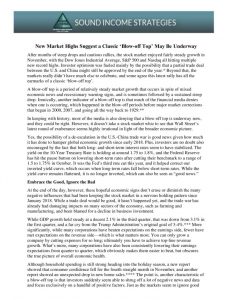 In last month’s newsletter, I noted that the stock market rally that began in November and continued through the end of the year had all the earmarks of a classic blow-off top, which is a period of fairly steady market growth that occurs in spite of mixed economic data and recessionary red flags, and is often followed by a steep market drop. Although the rally has, as of this writing, stalled a bit in response to new mounting tensions in the Middle East, I’m forecasting that the current blow-off top could continue in 2020—and possibly into 2021 since this year is an election year.

The main rationale for this forecast can be summarized in two words: The Fed. Late last year, the Federal Reserve sent a clear signal that it will continue doing everything in its power to keep the stock market artificially inflated and delay the next major correction—just as it has been ever since the Financial Crisis. The Fed sent this signal with the launch of yet another round of quantitative easing, which was triggered in response to a liquidity crisis that occurred in the banking system last September.

As I’ve explained previously, in addition to instantly pumping money into the system, the Fed began buying up short-term treasuries in October at $60 billion a month.* They will continue doing so into the second quarter of this year in an effort to manipulate the short end of the yield curve. As you’ll recall, the U.S. yield curve became inverted for a period starting in July of 2019, meaning long-term interest rates had sunk below short-term rates—a situation that forced the Fed to lower short-term rates three times last year after having raised them steadily the year before.

Remember, the bond market—which, unlike the stock market, is driven by logic rather than emotion—considers an inverted yield curve a reliable indicator of a coming recession. That’s largely why the yield on the 10-Year Treasury rate stabilized at between 1.5 and 2% late last year: the bond market was paying attention to this warning sign, and I believe it will continue to do so.

Based on history, we know that a recession typically hits 12 to 18 months after we have a flat or inverted yield curve. Since the yield curve became inverted last July, that means we should see a recession hit somewhere between August of 2020 and early 2021. However, with the Fed buying up short-term treasuries, they’re trying to ignore the logical message from the bond market that the economy is slowing, and to feed Wall Street’s irrational exuberance with more artificial tinkering. Ultimately, the Fed is trying to pretend that the yield curve was never inverted simply because they un-inverted it so quickly. The fact is, though, historically, an inverted yield curve never stays that way for very long.

At the same time, the Fed is also trying to ignore several other recession warning signs as they pump yet another shot of temporary adrenaline into the markets. That shot could receive an extra boost in 2020 because it’s a presidential election year, which are often good years for the stock market. Since President Trump takes great pride in what the markets have done since his election, it’s likely he will do everything within his power to keep the them going.

On the other hand, be aware that in addition to all the recessionary warning signs out there, there are also plenty of unstable situations in the geopolitical realm that could trigger the next big selloff. Those include an impeachment process and—now, of course—the brewing threat of a war with Iran. As of this writing, that issue already seems to have investors tapping the brakes on the latest rally.**

news and focus solely on bad news when they’re in a sustained downturn, the opposite happens in a blow-off top period.

With the Fed clearly recommitted to doing everything it can to artificially alter the markets’ natural course (as they’ve been doing for almost a decade now), I believe it’s possible that the reckoning may occur later—possibly not until 2021.

That’s when we could see the recession that economists are increasingly warning about, and the start of the next major sustained market correction. Before that, it’s possible this blow-off top may add another 10 to 20% market growth. In the meantime, though, I believe that overall low interest rates will remain the norm, and GDP growth will remain stagnant or continue to decline slightly in the year ahead.

Ultimately, the two important questions for investors to keep in mind as they track the blow-off stock market in the coming year are: “Is it real, and if not, do I really want to bet on something that’s artificial?” Now, if you’re a speculator or a day trader, the answer to the second question might be yes. You might decide that it makes sense to stay in the market—as many speculators will—with one finger on the trigger, ready to pull out quickly when the next big correction hits.

However, if you’re not a speculator, if you’re an everyday investor who is retired or within ten years of retirement, then I would argue you probably don’t want to bet on something that isn’t real. I would argue you don’t want to play that game because even if this blow-off top does add another 20% growth, history tells us that the next major correction could mean a loss of between 40 and 70%. Most retirees and near retirees simply can’t afford to get caught in that downdraft, which is why I believe most should continue to make overprotection their number one financial priority in 2020!