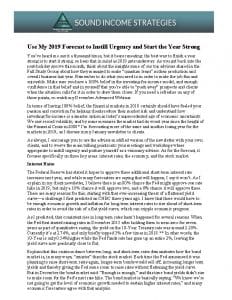 You’ve heard me say it a thousand times, but it bears repeating: the best way to finish a year strong is to start it strong, so keep that in mind as 2019 gets underway. As you get back into the post-holiday groove this month, think about the insights some of our top advisors shared in the Fall Study Group about how they managed to make “quantum leaps” in their production and overall business last year. Remember to do what you need to in order to make the job fun and enjoyable. Make sure you have a 100% belief in the investing-for-income model, and enough confidence in that belief and in yourself that you’re able to “push away” prospects and clients when the situation calls for it in order to draw them closer. If you need a refresher on any of those points, re-watch my December Advanced Webinar.

In terms of having 100% belief, the financial markets in 2018 certainly should have fueled your passion and conviction for helping clients reduce their market risk and understand how investing-for-income is a smarter option in today’s unprecedented age of economic uncertainty.

We saw record volatility, and by some measures the market had its worst year since the height of the Financial Crisis in 2008* I’m forecasting more of the same and another losing year for the markets in 2019, as I discuss in my January newsletter to clients.

As always, I encourage you to use the advisor-modified version of the newsletter with your own clients, and to weave the main talking points into your meetings and workshops where appropriate to instill urgency and posture yourself as a visionary advisor. As for the forecast, it focuses specifically on three key areas: interest rates, the economy, and the stock market.

increases next year, and while many forecasters are saying that will happen, I say it won’t. As I explain in my client newsletter, I believe there is an 80% chance the Fed might approve one rate hike in 2019, but only a 10% chance it will approve two, and a 0% chance it will approve three. There are many reasons for this, starting with that ever-increasing threat of a flattened yield curve—a challenge I first predicted on CNBC three years ago. I knew that there would have to be enough economic growth and inflation for long-term interest rates to rise ahead of short-term rates in order to avoid the risk of a flat yield curve, which can cripple economic progress.

As I predicted, that consistent rise in long-term rates hasn’t happened for several reasons. When the Fed first started raising rates in December 2015 after holding them to near-zero for seven years as part of quantitative easing, the yield on the 10-Year Treasury rate was around 2.20%. Currently it’s at 2.74%, and only briefly topped 3% a few times in 2018.** In other words, the 10-Year is only 0.54%higher while the Fed funds rate has gone up an entire 2%, leaving the yield curve now perilously close to flat.

Explain that this cautious dance between long- and short-term rates demonstrates how the bond market is, in many ways, “smarter” than the stock market. Each time the Fed announced it was planning to raise short-term rates again, longer-term bonds would sell off, increasing longer term yields and thereby giving the Fed some room to raise rates without flattening the yield curve.

But in December the bond market said: “Enough is enough,” and this time bond yields didn’t rise to make room for the Fed’s next rate hike. The bond market is basically saying, “We know we’re not going to get the level of economic growth needed to sustain higher interest rates,” and many economic forecasters agree with that analysis.

As you know, on December 3rd the yield curve already became partially flat when yields on the 2-Year Treasury rate rose higher than yields on 5-Year Treasuries. Point out that a flat yield curve preceded both of the last two major market crashes, starting in 2000 and 2007, and is recognized by economists as a huge red flag of a coming recession.

With that in mind, the second part of my forecast for 2019 is that economic growth will, in fact, slow considerably and possibly even give way to a new recession by the end of the year. The evidence for this is compelling, and many other experts are predicting a new recession is in the works. A recent JP Morgan survey found that 75% of ultra-high net worth investors believe a recession will hit by 2020, with 21%of them predicting it will start in 2019.***

Perhaps the main reason is that these investors know that corporations have already ingested all the profits from the Trump Administration’s corporate tax cut. At 15%, that cut was the biggest “boost” provided by the new tax plan, and it helped GDP growth top 4% in the second quarter and hit 3.5% in the third quarter last year. But that effect won’t last, which means future growth is more dependent on individual tax cuts, which were only 3% and 4%. Yes, that gives

consumers a little extra spending money, but certainly not enough to sustain GDP growth rates of over 3% and 4%. Remember, too, that the biggest consumer demographic—Baby Boomers—is beyond their prime spending years; they’re more focused on paying off debts and saving for retirement, which also makes it harder to achieve the kind of GDP growth we had in the 90s.

There are many other factors pointing toward stalling growth and a possible recession in the coming year—along with a host of brewing geopolitical factors that could make the economic outlook for 2019 even bleaker. Those include, of course, the ongoing trade war with China, economic instability in Europe and Asia, the mounting federal deficit, and political turmoil in Washington—which is only likely to increase now that Democrats control the House.

Even if none of those situations escalates and leads to a tipping point for the stock market, point out that emotion is the market’s main driver, and that fear alone can have real consequences.

Considering just how many “fear factors” are in play right now, the final piece of my forecast for 2019 is, indeed, a stock market drop. It may or may not be the long-overdue third major drop of our current secular bear market cycle, but either way I do believe the stock market will end this year lower than it began once again.

Now, is it possible we’ll see some more spikes and gains over the course of the year? Of course. In fact, it’s a safe bet there will always be occasional good news throughout the year that gets Wall Street briefly excited. But I believe the spikes will prove to be just more of the extreme volatility we saw in 2018, and that ultimately the stock market will finish 2019 with another loss.

In sharing all these details with clients, explain that recessions and major market corrections have many different causes and symptoms, and that what we’re seeing now are a lot of

symptoms with the potential to become causes. That’s how economics and financial markets work: sometimes the tail wags the dog until dog starts wagging the tail.

influences don’t allow long-term interest rates to increase, and/or the Fed raises short-term rates too quickly. This is when the symptom can quickly become the cause: banks could stop lending because there’s not enough profit when the yield curve is flat, which would hit businesses and the housing market hard, creating a domino effect that leads to an actual recession.

Point out that this same idea holds true for the stock market. Sometimes the stock market drops because a recession occurs, and the selloff is a symptom of the recession. But sometimes a volatile or tumbling stock market based on fears of stalling growth and a flattening yield curve (like we’re seeing now) can cause the recession, partly by creating the “reverse wealth effect.” Investors see their 401Ks shrinking and—regardless of whether they have more disposable income thanks to a tax cut or wage increase—they feel less wealthy, so they cut way back on spending and the economy shrinks into recession.

Again, use these points and my entire 2019 forecast to not only help educate clients and prospects, but to fuel your own passion & conviction and ensure your belief system is operating at 100% in the coming year. Happy New Year!

Sound Income Strategies, LLC is an SEC Registered Investment Advisory firm. Information presented is for educational purposes only and does not intend to make an offer or solicitation for the sale or purchase of any specific securities, investments, or investment strategies. Investments involve risk and unless otherwise stated, are not guaranteed. Be sure to first consult with a qualified financial advisor or tax professional about your specific financial situation before implementing any strategy discussed herein