As Summer Begins, Sideways Stock Market Remains Erratic as Ever 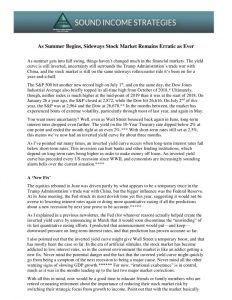 As summer gets into full swing, things haven’t changed much in the financial markets. The yield curve is still inverted, uncertainty still surrounds the Trump Administration’s trade war with China, and the stock market is still on the same sideways rollercoaster ride it’s been on for a year-and-a-half.

The S&P 500 hit another new record high on July 1st, and on the same day, the Dow Jones Industrial Average also briefly topped its all-time high from October of 2018.* Ultimately, though, neither index is much higher at the mid-point of 2019 than it was at the start of 2018. On January 26 a year ago, the S&P closed at 2,872, while the Dow hit 26,616. On July 2nd of this year, the S&P was at 2,964 and the Dow at 26,678.** In the months between, the market has experienced bouts of extreme volatility, particularly through most of last year, and again in May.

You want more uncertainty? Well, even as Wall Street bounced back again in June, long-term interest rates dropped even further. The yield on the 10 Year Treasury rate dipped below 2% at one point and ended the month right at an even 2%.*** With short-term rates still set at 2.5%, this means we’ve now had an inverted yield curve for about three months.

As I’ve pointed out many times, an inverted yield curve occurs when long-term interest rates fall below short-term rates. This inversion can hurt banks and other lending institutions, which depend on long-term rates being higher in order to make money off loans. An inverted yield curve has preceded every US recession since WWII, and economists are increasingly sounding alarm bells over the current situation.****

The equities rebound in June was driven partly by what appears to be a temporary truce in the Trump Administration’s trade war with China, but the bigger influence was the Federal Reserve. At its June meeting, the Fed struck its most dovish tone yet this year, suggesting it would not be averse to lowering interest rates again or doing more quantitative easing if all the predictions about a new recession by next year prove to be accurate.*****

As I explained in a previous newsletter, the Fed (for whatever reason) actually helped create the inverted yield curve by announcing in March that it would soon discontinue the “unwinding” of its last quantitative easing efforts. I predicted that announcement would put—and keep— downward pressure on long-term interest rates, and that prediction has proven accurate so far.

I also pointed out that the inverted yield curve might give Wall Street a temporary boost, and that has mostly been the case so far. In the era of artificial stimulus, the stock market has become addicted to low interest rates, so in the current environment the market is like an addict getting a new fix. Never mind the potential danger and the fact that the inverted yield curve might quickly go from being a symptom of the next recession to being a  major cause. Never mind all the other warning signs of slowing GDP growth.****** For now, “irrational exuberance” is in control, much as it was in the months leading up to the last two major market corrections.

With all this in mind, now would be a good time to educate friends or family members who are retired or nearing retirement about the importance of reducing their stock market risk by switching their strategic focus from growth to income. Point out that with the market basically trading sideways for a year and a half now, and marked by bouts of extreme volatility, it’s a classic sign that big investors likely have “one finger on the trigger,” ready to pull out as soon as the next major sustained market correction takes hold.

An analogy I often use for this situation is that it’s like a game of musical chairs. When the music stops and next big drop hits, who do you think is most likely to get caught “without a chair”? Will it be the big institutional investor on Wall Street who has computerized algorithms that can instantly trigger trades on his behalf before the market even opens? Or will it be the everyday investor whose advisor still has most of his clients’ retirement savings invested in stocks and mutual funds?

Remember, too, that history indicates the next major drop will likely range somewhere between 45 and 70%. That means, even if the market were to add another 10 or 20% before the next drop hits, that gain is minimal compared to the potential loss. As regular readers may know, the analogy I often use to illustrate this point is that it’s like a casino game that pays you $10 if you win but costs you $70 if you lose. Would any rational person really be likely to play that game? Probably not. However, investors still trying to wring every last possible dime out of the current cyclical bull market are basically playing the same game.

So, again, I encourage you to share some of these facts and insights with friends or family members you fear might be carrying too much market risk at this highly uncertain time. If you’re not sure your own portfolio is as secure and focused on income as it might be, don’t wait to take action!