Coronavirus Fear May Lead to More Extreme Volatility, or Something Worse 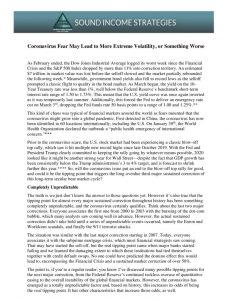 As February ended, the Dow Jones Industrial Average logged its worst week since the Financial Crisis and the S&P 500 Index dropped by more than 11% into correction territory. An estimated $7 trillion in market value was lost before the selloff slowed and the market partially rebounded the following week.* Meanwhile, government bond yields also fell to record lows as the selloff prompted a classic flight to quality in the bond market. As March began, the yield on the 10-Year Treasury rate was less than 1%, well below the Federal Reserve’s benchmark short-term interest rate range of 1.50 to 1.75%. This meant that the U.S. yield curve was once again inverted as it was temporarily last summer. Additionally, this forced the Fed to deliver an emergency rate cut on March 3rd, dropping the Fed funds rate 50 basis points to a range of 1.00 and 1.25%.**

This kind of chaos was typical of financial markets around the world as fears mounted that the coronavirus might grow into a global pandemic. First detected in China, the coronavirus has now been identified in 60 locations internationally, including the U.S. On January 30th, the World Health Organization declared the outbreak a “public health emergency of international concern.”***

Prior to the coronavirus scare, the U.S. stock market had been experiencing a classic blow-off top rally, which saw it hit multiple new record highs since late October 2019. With the Fed and President Trump clearly committed to keeping the rally going by whatever means possible, 2020 looked like it might be another strong year for Wall Street—despite the fact that GDP growth has been consistently below the Trump administration’s 3 to 4% target, and is forecast to shrink further this year.**** So, will the coronavirus issue put an end to the blow-off top rally for good, and could it be the tipping point that triggers the long-overdue third major sustained correction of this long-term secular bear market cycle?

The truth is we just don’t know the answer to those questions yet. However it’s also true that the tipping point for almost every major sustained correction throughout history has been something completely unpredictable, and the coronavirus certainly qualifies. Think about the last two major corrections. Everyone associates the first one from 2000 to 2003 with the bursting of the dot-com bubble, which many analysts saw coming well in advance. However, the actual sustained correction didn’t take hold until a series of unpredictable events occurred, namely the Enron and Worldcom scandals, and finally the 9/11 terrorist attacks.

The situation was similar with the last major correction starting in 2007. Today, everyone associates it with the subprime mortgage crisis, which most financial strategists saw coming. That may have started the sell-off, but the real tipping point came when major banks started failing and we learned the damaging extent to which these institutions had tied themselves together with credit default swaps. No one could have predicted the domino effect this would lead to, encompassing the Financial Crisis and a sustained market correction of over 50%.

The point is, if you’re a regular reader, you know I’ve discussed many possible tipping points for the next major correction, from the Federal Reserve’s continued reckless overuse of quantitative easing to the overall instability of the global financial markets. However, the coronavirus has emerged as a totally unpredictable factor and, based on history, this increases its odds of being the real tipping point. It has other characteristics that increase those odds, as well.

As noted, despite the recent soaring stock market, economic growth for the U.S. has mostly fallen short of the Trump Administration’s 3 to 4% target. It was 2% or slightly higher in the second, third and fourth quarters of last year, and economists predict the coronavirus could potentially shave off another 1%. A pandemic—or even just the fear of one—can disrupt the global economy in a variety of ways. People stop traveling, major events are canceled. If the fear spreads, businesses may shut down and urge workers to stay home. All of this obviously has major ripple effects that are felt throughout the economy.

Finally, another common characteristic of a market tipping point is that it’s very newsworthy, and the coronavirus certainly qualifies on that score, too. It’s so newsworthy, in fact, that it’s been diverting attention from the presidential race and other major issues. The more it continues grabbing headlines, the more likely it is that the fear we’ve seen reflected in the financial markets will continue—and possibly increase. Does that mean we’ll continue getting whipsawed by thousand-point swings as we did in the last week of February? Or does it mean that the long-overdue third major sustained correction of what I believe is our current long-term secular bear market cycle may finally take hold, ultimately leading to a drop of between 40 and 70%?

Again, we just don’t know the answers yet. But for investors in or nearing retirement who may still be carrying too much market risk, ask yourself this: with the market already below its peak high from over two years ago, is it worth waiting much longer to find out?