After a Calmer April, the Market is Offering a Gift to Those Who Need It 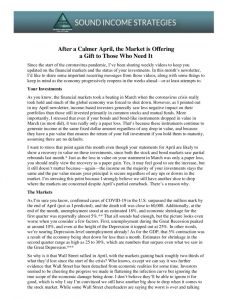 Since the start of the coronavirus pandemic, I’ve been sharing weekly videos to keep you updated on the financial markets and the status of your investments. In this month’s newsletter, I’d like to share some important recurring messages from those videos, along with some things to keep in mind as the economy progressively reopens in the weeks ahead—or at least attempts to.

As you know, the financial markets took a beating in March when the coronavirus crisis really took hold and much of the global economy was forced to shut down. However, as I pointed out in my April newsletter, income-based investors generally saw less negative impact on their portfolios than those still invested primarily in common stocks and mutual funds. More importantly, I stressed that even if your bonds and bond-like instruments dropped in value in March (as most did), it was really only a paper loss. That’s because these instruments continue to generate income at the same fixed dollar amount regardless of any drop in value, and because they have a par value that ensures the return of your full investment if you hold them to maturity, assuming there are no defaults.

I want to stress that point again this month even though your statements for April are likely to show a recovery in value on these investments, since both the stock and bond markets saw partial rebounds last month.* Just as the loss in value on your statement in March was only a paper loss, you should really view the recovery as a paper gain. Yes, it may feel good to see the increase, but it still doesn’t matter because—again—the income on the majority of your investments stays the same and the par value means your principal is secure regardless of any ups or downs in the market. I’m stressing this point because I strongly believe we still have another shoe to drop where the markets are concerned despite April’s partial comeback. There’s a reason why.

As I’m sure you know, confirmed cases of COVID-19 in the U.S. surpassed the million mark by the end of April (just as I predicted), and the death toll was close to 60,000. Additionally, at the end of the month, unemployment stood at an estimated 18%, and economic shrinkage for the first quarter was reportedly almost 5%.** That all sounds bad enough, but the picture looks even worse when you consider a few factors. First, unemployment during the Great Recession peaked at around 10%, and even at the height of the Depression it topped out at 25%. In other words, we’re nearing Depression-level unemployment already! As for the GDP, that 5% contraction was a result of the economy being shut down for less than a month. Estimates for shrinkage in the second quarter range as high as 25 to 30%, which are numbers that surpass even what we saw in the Great Depression.***

So why is it that Wall Street rallied in April, with the markets gaining back roughly two-thirds of what they’d lost since the start of the crisis? Who knows, except we can say it was further evidence that Wall Street has been detached from economic realities for some time. Investors seemed to be cheering the progress we made in flattening the infection curve but ignoring the true scope of the economic damage being done. I don’t believe they’ll be able to ignore it for good, which is why I say I’m convinced we still have another big shoe to drop when it comes to the stock market. While some Wall Street cheerleaders are saying the worst is over and talking about a V-shaped recovery or a U-shaped recovery, I think a W-shaped recovery is more likely. When the market dropped by almost 40% in March, that formed the left side of the W. The next drop and slow recovery will form the right side, and I believe the next down-wave will likely surpass the first—possibly ranging between 55 and 80%, according to market history.

The good news for our clients is that most of you have very little money in common stocks or mutual funds, which are likely to be hit hardest when and if that next big down-wave occurs. You may see values drop on some of your own investments, but I’ve already explained why that doesn’t really matter when you’re invested for income. However, even if you do have higher-risk investments elsewhere, there’s still good news: the April rebound means you have time to lower your risk before the next shoe drops.

Remember, there’s no law that says you can’t buy into the market at another time if you take money out now. You don’t have to ride it all the way to the bottom in order to ride it back to the top. As I often say, one reason the rich get richer is that they have cash reserves to take advantage of buying opportunities in real estate and the stock market. You can use that same strategy by taking some cash off the table now while the market is giving you the chance.

When the market first dropped in March, it happened so quickly there wasn’t really time to take action. But with the partial rebound and lower volatility we’ve seen more recently, the market is basically giving you a gift. It offered up a similar gift in 2008, and those who didn’t take advantage ended up riding that 56% correction all the way down. Those who did take action and lowered their risk then had money to buy back into the market when it bottomed out. Think about it: when you can buy something at a 50% off sale, that’s a great deal! In looking at all the data—I believe that’s where we’re headed with this market.

So, stay safe and be patient as the economy reopens, and realize that there are likely to be setbacks. Hope for the best but prepare for the worst. Also keep in mind that the current crisis illustrates exactly why you switched your investment focus from growth to protection and income in the first place! If you still have money in stocks and mutual fund elsewhere, now might be a good time to think about the gift the market is giving you, and to accept it!

**“Millions of Layoffs Set to Push Unemployment Rate to Highest Level Since Great Depression,” MarketWatch, May 4, 2020