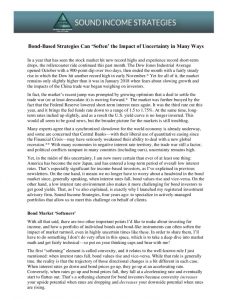 In a year that has seen the stock market hit new record highs and experience record short-term drops, the rollercoaster ride continued this past month. The Dow Jones Industrial Average opened October with a 900-point dip over two days, then ended the month with a fairly steady rise in which the Dow hit another record high in early November.* Yet for all of it, the market remains only slightly higher than it was in January 2018 when fears about slowing growth and the impacts of the China trade war began weighing on investors.

In fact, the market’s recent jump was prompted by growing optimism that a deal to settle the trade war (or at least deescalate it) is moving forward.* The market was further buoyed by the fact that the Federal Reserve lowered short-term interest rates again. It was the third rate cut this year, and it brings the fed funds rate down to a range of 1.5 to 1.75%. At the same time, long-term rates inched up slightly, and as a result the U.S. yield curve is no longer inverted. This would all seem to be good news, but the broader picture for the markets is still troubling.

Many experts agree that a synchronized slowdown for the world economy is already underway, and some are concerned that Central Banks—with their liberal use of quantitative easing since the Financial Crisis—may have seriously weakened their ability to deal with a new global recession.** With many economies in negative interest rate territory, the trade war still a factor, and political conflicts rampant in many countries (including ours), uncertainty remains high.

Yet, in the midst of this uncertainty, I am now more certain than ever of at least one thing: America has become the new Japan, and has entered a long-term period of overall low interest rates. That’s especially significant for income-based investors, as I’ve explained in previous newsletters. On the one hand, it means we no longer have to worry about a headwind in the bond market since, generally speaking, when interest rates fall, bond values rise and vice-versa. On the other hand, a low interest rate environment also makes it more challenging for bond investors to get good yields. That, as I’ve also explained, is exactly why I launched my registered investment advisory firm, Sound Income Strategies, four years ago: to specialize in actively-managed portfolios that allow us to meet this challenge on behalf of clients.

With all that said, there are two other important points I’d like to make about investing for income, and how a portfolio of individual bonds and bond-like instruments can often soften the impact of market turmoil, even in highly uncertain times like these. In order to share them, I’ll have to do something I don’t do very often in this space, which is to take a deep dive into market math and get fairly technical—so put on your thinking caps and bear with me!

The first “softening” element is called convexity, and it relates to the well-known rule I just mentioned: when interest rates fall, bond values rise and vice-versa. While that rule is generally true, the reality is that the trajectory of those directional changes is a bit different in each case. When interest rates go down and bond prices go up, they go up at an accelerating rate. Conversely, when rates go up and bond prices fall, they fall at a decelerating rate and eventually start to flatten out. That’s a softening element for bond investors because convexity increases your upside potential when rates are dropping and decreases your downside potential when rates are rising.

The second softener is one I’ve explained before, and it has to do with credit spreads. As you probably know, when bond prices go up and stocks go down it’s often because there is a flight to quality, which means many investors are suddenly fleeing the relative uncertainty of the stock market for the relative security of the bond market. The opposite is also true; sometimes stocks go up and bonds go down because there’s a flight from quality. That’s easy enough to understand, but there’s another factor that affects bond prices, and that is credit spreads.

Let’s say the yield on the 10-Year Treasury Bond is 1.75% and the yield on a Triple-B Corporate Bond is about 3.75%—which is roughly accurate in both cases right now. That means the credit spread is 2%. In other words, the amount of additional interest that investors require to switch from a 10-Year U.S. Treasury to a 10-Year Triple-B Corporate is currently 2%. However, if there were a flight from quality, bond prices were to drop, and interest rates on the 10-Year Treasury were to start to go up, investors would probably get more confident. They might say, “I don’t need 2% to make the switch; I can live with 1%,” which would cause the credit spread to shrink. Therefore, it is completely possible that treasury prices could drop because their yields go from 1.75 to 2.75, but the price on Triple-B Corporate Bonds could stay the same or drop a lot less because their yield stays the same or goes up just a little. Just remember that “when interest rates go up and bond prices go down,” it has to be the interest rate attributable to the class of bond you’re holding, thanks to credit spreads.

These factors are a little complex, I know, but it’s important to always keep in mind that simple rules such as “when interest rates go up, bond values go down” aren’t ever as simple as they might sound. The bottom line is that Investing for Income provides multiple ways to protect your money and maximize your retirement income—even in the most uncertain of times!