Is the Banking System’s Recent Liquidity Crunch a Potential ‘Iceberg’? 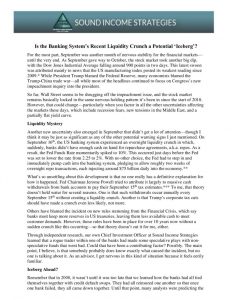 For the most part, September was another month of nervous stability for the financial markets— until the very end. As September gave way to October, the stock market took another big dip, with the Dow Jones Industrial Average falling around 900 points in two days. This latest swoon was attributed mainly to news that the US manufacturing index posted its weakest reading since 2009.* While President Trump blamed the Federal Reserve, many economists blamed the Trump-China trade war—all while most of the headlines continued to focus on Congress’s new impeachment inquiry into the president.

So far, Wall Street seems to be shrugging off the impeachment issue, and the stock market remains basically locked in the same nervous holding pattern it’s been in since the start of 2018. However, that could change—particularly when you factor in all the other uncertainties affecting the markets these days, which include recession fears, new tensions in the Middle East, and a partially flat yield curve.

Another new uncertainty also emerged in September that didn’t get a lot of attention—though I think it may be just as significant as any of the other potential warning signs I just mentioned. On September 16th, the US banking system experienced an overnight liquidity crunch in which, suddenly, banks didn’t have enough cash on hand for repurchase agreements, a.k.a. repos. As a result, the Fed Funds Rate momentarily spiked to 10%. This occurred just days before the Fed was set to lower the rate from 2.25 to 2%. With no other choice, the Fed had to step in and immediately pump cash into the banking system, pledging to allow roughly two weeks of overnight repo transactions, each injecting around $75 billion daily into the economy.**

What’s so unsettling about this development is that no one really has a definitive explanation for how it happened. Fed Chairman Jerome Powell tried to attribute it largely to massive cash withdrawals from bank accounts to pay their September 15th tax estimates.*** To me, that theory doesn’t hold water for several reasons. One is that such withdrawals occur annually every September 15th without creating a liquidity crunch. Another is that Trump’s corporate tax cuts should have made a crunch even less likely, not more.

Others have blamed the incident on new rules stemming from the Financial Crisis, which say banks must keep more reserves in US treasuries, leaving them less available cash to meet customer demands. However, those rules have been in place for over 10 years now without a sudden crunch like this occurring—so that theory doesn’t cut it for me, either.

Through independent research, our own Chief Investment Officer at Sound Income Strategies learned that a rogue trader within one of the banks had made some speculative plays with non-speculative funds that went bad. Could that have been a contributing factor? Possibly. The main point, I believe, is that somebody probably does know exactly what caused the incident, but no one is talking about it. As an advisor, I get nervous in this kind of situation because it feels eerily familiar.

Remember that in 2008, it wasn’t until it was too late that we learned how the banks had all tied themselves together with credit default swaps. They had all reinsured one another so that once one bank failed, they all came down together. Until that point, many analysts were predicting the

subprime mortgage crisis might cause a bump in the road for the economy, but nothing more. It was like an iceberg: some danger was visible above the surface, but the extreme extent of it remained hidden until we crashed into it!

Is it possible this liquidity emergency in September is evidence that banks have tied themselves together again in some other way—with interest rate swaps, for example? It seems unlikely to me that a majority of banks would have suddenly all run out of cash at the same time. It seems more likely that the crunch would have started with just a few banks but impacted the entire system due to an underlying connection that we may not yet know about.

The bottom line is that, even though this incident didn’t grab a lot of headlines, it should give investors pause. For example, a friend of mine recently asked my opinion about which of two houses he should buy. I said neither until we understand exactly what caused this banking liquidity emergency—and what it might mean for the economy and markets going forward.

Again, this issue wasn’t widely covered in the financial media, and still hasn’t gotten a great deal of attention. That’s why I felt it was important to share it with my own clients. Could the incident be early evidence that another financial crisis of some kind is brewing? No one knows, of course. However, with the third major correction of our current long-term secular bear market cycle long overdue, and with so many other red flags out there now, it’s important to at least be aware of it—particularly if you’re still not sure you’ve adequately reduced your own stock market risk.

As always, I encourage you to share this information—and this newsletter—with friends or family members you feel may be in danger of getting caught in the next sustained market downdraft. While it’s possible (although unlikely) that this incident could merely be a financial fluke, it could also be the proverbial tip of the iceberg.