Volatility Returns to the Stock Market, and May Well Stick Around 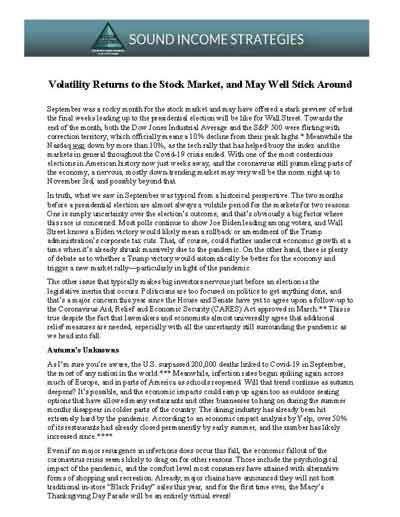 September was a rocky month for the stock market and may have offered a stark preview of what the final weeks leading up to the presidential election will be like for Wall Street. Towards the end of the month, both the Dow Jones Industrial Average and the S&P 500 were flirting with correction territory, which officially means a 10% decline from their peak highs.* Meanwhile the Nasdaq was down by more than 10%, as the tech rally that has helped buoy the index and the markets in general throughout the Covid-19 crisis ended. With one of the most contentious elections in American history now just weeks away, and the coronavirus still pummeling parts of the economy, a nervous, mostly down-trending market may very well be the norm right up to November 3rd, and possibly beyond that.

In truth, what we saw in September was typical from a historical perspective. The two months before a presidential election are almost always a volatile period for the markets for two reasons. One is simply uncertainty over the election’s outcome, and that’s obviously a big factor where this race is concerned. Most polls continue to show Joe Biden leading among voters, and Wall Street knows a Biden victory would likely mean a rollback or amendment of the Trump administration’s corporate tax cuts. That, of course, could further undercut economic growth at a time when it’s already shrunk massively due to the pandemic. On the other hand, there is plenty of debate as to whether a Trump victory would automatically be better for the economy and trigger a new market rally—particularly in light of the pandemic.

The other issue that typically makes big investors nervous just before an election is the legislative inertia that occurs. Politicians are too focused on politics to get anything done, and that’s a major concern this year since the House and Senate have yet to agree upon a follow-up to the Coronavirus Aid, Relief and Economic Security (CARES) Act approved in March.** This is true despite the fact that lawmakers and economists almost universally agree that additional relief measures are needed, especially with all the uncertainty still surrounding the pandemic as we head into fall.

As I’m sure you’re aware, the U.S. surpassed 200,000 deaths linked to Covid-19 in September, the most of any nation in the world.*** Meanwhile, infection rates began spiking again across much of Europe, and in parts of America as schools reopened. Will that trend continue as autumn deepens? It’s possible, and the economic impacts could ramp up again too as outdoor seating options that have allowed many restaurants and other businesses to hang on during the summer months disappear in colder parts of the country. The dining industry has already been hit extremely hard by the pandemic. According to an economic impact analysis by Yelp, over 50% of its restaurants had already closed permanently by early summer, and the number has likely increased since.****

Even if no major resurgence in infections does occur this fall, the economic fallout of the coronavirus crisis seems likely to drag on for other reasons. Those include the psychological impact of the pandemic, and the comfort level most consumers have attained with alternative forms of shopping and recreation. Already, major chains have announced they will not host traditional in-store “Black Friday” sales this year, and for the first time ever, the Macy’s Thanksgiving Day Parade will be an entirely virtual event!

So far, the massive shift to things like e-commerce, videoconferencing, and virtual entertainment has managed to offset the impact of business closures and social distancing rules and helped limit some of the economic damage from Covid-19. However, the longer-term repercussions of this shift have probably yet to be felt as they relate to things like jobs, bottom-line corporate growth, and overall economic stability. Big investors know this, and it’s another reason they’re likely to keep “one finger on the trigger” in the last quarter of the year, ready to pull out if nervousness gives way to fear and triggers another major market downturn.

While a nervous market in the months before an election is historically common, there also some things about our current situation that make it very uncommon—namely the pandemic and the highly divisive political climate surrounding this election. So far Wall Street has shown amazing resilience in the face of these issues, but that’s due largely to another factor that isn’t merely uncommon but entirely unprecedented. That is the massive amount of artificial stimulus the Federal Reserve has pumped into the economy since the Financial Crisis 10 years ago— which has become even more massive as a result of the pandemic.*****

Will the Fed’s “steroids” continue to pump up Wall Street and stave off another major correction even if coronavirus cases see another major spike this fall? Or even if another relief and stimulus package is not approved? Or even if there is a lengthy legal and congressional battle over the results of the election that prolongs legislative inertia and keeps Washington stuck in the muck like a stalled Jeep?

The bottom line is that these are all important questions to consider as you review your financial strategy this fall. Are you playing smart and sufficient financial defense at this crucial time? Are you well-positioned to take advantage of new opportunities that may emerge one day when the markets and economy are more stable again? Because, rest assured, that day will come!