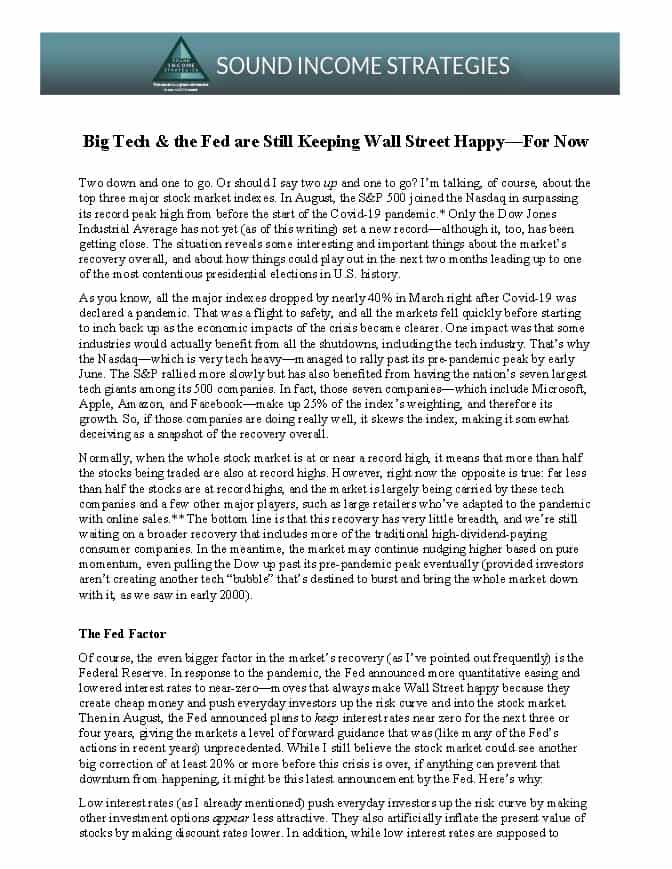 Two down and one to go. Or should I say two up and one to go? I’m talking, of course, about the top three major stock market indexes. In August, the S&P 500 joined the Nasdaq in surpassing its record peak high from before the start of the Covid-19 pandemic.* Only the Dow Jones Industrial Average has not yet (as of this writing) set a new record—although it, too, has been getting close. The situation reveals some interesting and important things about the market’s recovery overall, and about how things could play out in the next two months leading up to one of the most contentious presidential elections in U.S. history.
As you know, all the major indexes dropped by nearly 40% in March right after Covid-19 was declared a pandemic. That was a flight to safety, and all the markets fell quickly before starting to inch back up as the economic impacts of the crisis became clearer. One impact was that some industries would actually benefit from all the shutdowns, including the tech industry. That’s why the Nasdaq—which is very tech heavy—managed to rally past its pre-pandemic peak by early June. The S&P rallied more slowly but has also benefited from having the nation’s seven largest tech giants among its 500 companies. In fact, those seven companies—which include Microsoft, Apple, Amazon, and Facebook—make up 25% of the index’s weighting, and therefore its growth. So, if those companies are doing really well, it skews the index, making it somewhat deceiving as a snapshot of the recovery overall.
Normally, when the whole stock market is at or near a record high, it means that more than half the stocks being traded are also at record highs. However, right now the opposite is true: far less than half the stocks are at record highs, and the market is largely being carried by these tech companies and a few other major players, such as large retailers who’ve adapted to the pandemic with online sales.** The bottom line is that this recovery has very little breadth, and we’re still waiting on a broader recovery that includes more of the traditional high-dividend-paying consumer companies. In the meantime, the market may continue nudging higher based on pure momentum, even pulling the Dow up past its pre-pandemic peak eventually (provided investors aren’t creating another tech “bubble” that’s destined to burst and bring the whole market down with it, as we saw in early 2000).

Of course, the even bigger factor in the market’s recovery (as I’ve pointed out frequently) is the Federal Reserve. In response to the pandemic, the Fed announced more quantitative easing and lowered interest rates to near-zero—moves that always make Wall Street happy because they create cheap money and push everyday investors up the risk curve and into the stock market. Then in August, the Fed announced plans to keep interest rates near zero for the next three or four years, giving the markets a level of forward guidance that was (like many of the Fed’s actions in recent years) unprecedented. While I still believe the stock market could see another big correction of at least 20% or more before this crisis is over, if anything can prevent that downturn from happening, it might be this latest announcement by the Fed. Here’s why:
Low interest rates (as I already mentioned) push everyday investors up the risk curve by making other investment options appear less attractive. They also artificially inflate the present value of stocks by making discount rates lower. In addition, while low interest rates are supposed to
stimulate the economy by creating so-called “healthy” inflation, we’ve already learned from the Financial Crisis that it doesn’t work that way. The Fed kept interest rates near zero for seven years after 2008, and all it really did was fuel a big asset recovery that was largely out of whack with the much slower and weaker economic recovery. I foresee the same thing happening again because Baby Boomers are still the nation’s biggest spenders. With interest rates low, the market high, and the economy plagued by uncertainty, I believe they are more likely to continue saving and investing rather than spending. All of this could help keep the stock market buoyed even if earnings and employment numbers remain below pre-pandemic levels for a while.

Of Pandemics and Presidents

On the other hand, all that economic uncertainty I mentioned could end up playing a much bigger role in the markets than it has so far, regardless of the Fed. The coronavirus pandemic has been blamed for over 180,000 American deaths, and although new cases have decreased from the huge spikes we saw in July, they remain as high now as they were at the height of the economic shutdown in March and April. With schools reopening this month and cooler weather soon to limit outdoor dining and recreation options in many states, cases and deaths could very well start rising again, leading to more business closures and more unemployment. Let’s not forget, too, that an estimated 30 million Americans are still collecting unemployment now, and that Congress has yet to agree on a second round of coronavirus relief.*** Could all these factors be a time bomb ticking away at the base of the booming markets? Only time will tell.
Of course, the other big factor heading into the fall is the presidential race, one of the most divisive and uncertain in our nation’s history. While Wall Street—generally speaking—loves Donald Trump, a large faction of the country does not. Most polls have shown Democratic nominee Joe Biden leading among voters for some time, and a Biden victory would most likely mean a rollback of Trump’s corporate tax breaks and a resulting decrease in corporate profits. If Biden is still leading by a healthy margin in October (which is historically already a shaky month for the markets), could it trigger a major selloff? Again, only time will tell. For now, my advice for investors in or near retiring is to stay focused on income—and on setting your portfolio up to take advantage of some potential new opportunities that may emerge when the uncertainty lessens and world makes a little more sense again.