With the Yield Curve Fully Inverted, Is the Clock Ticking Toward Recession? 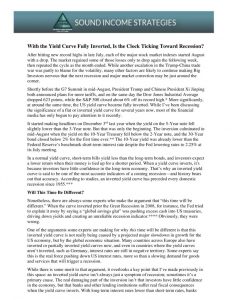 After hitting new record highs in late July, each of the major stock market indexes started August with a drop. The market regained some of those losses only to drop again the following week, then repeated the cycle as the month ended. While another escalation in the Trump-China trade war was partly to blame for the volatility, many other factors are likely to continue making Big Investors nervous that the next recession and major market correction may be just around the corner.

Shortly before the G7 Summit in mid-August, President Trump and Chinese President Xi Jinping both announced plans for more tariffs, and on the same day the Dow Jones Industrial Average dropped 623 points, while the S&P 500 closed about 6% off its record high.* More significantly, at around the same time, the US yield curve became fully inverted. While I’ve been discussing the significance of a flat or inverted yield curve for several years now, most of the financial media has only begun to pay attention to it recently.

It started making headlines on December 3rd last year when the yield on the 5-Year note fell slightly lower than the 3-Year note. But that was only the beginning. The inversion culminated in mid-August when the yield on the 10-Year Treasury fell below the 2-Year note, and the 30-Year bond closed below 2% for the first time ever.** The 10-Year yield was already lower than the Federal Reserve’s benchmark short-term interest rate despite the Fed lowering rates to 2.25% at its July meeting.

In a normal yield curve, short-term bills yield less than the long-term bonds, and investors expect a lower return when their money is tied up for a shorter period. When a yield curve inverts, it’s because investors have little confidence in the long-term economy. That’s why an inverted yield curve is said to be one of the most accurate indicators of a coming recession—and history bears out that accuracy. According to studies, an inverted yield curve has preceded every domestic recession since 1955.***

Will This Time Be Different?

Nonetheless, there are always some experts who make the argument that “this time will be different.” When the curve inverted prior the Great Recession in 2008, for instance, the Fed tried to explain it away by saying a “global savings glut” was pushing excess cash into US treasuries, driving down yields and creating an unreliable recession indicator.**** Obviously, they were wrong.

One of the arguments some experts are making for why this time will be different is that this inverted yield curve is not really being caused by a projected major slowdown in growth for the US economy, but by the global economic situation. Many countries across Europe also have inverted or partially inverted yield curves now, and even in countries where the yield curves aren’t inverted, such as Germany, interest rates are still in negative territory. Some experts say this is the real force pushing down US interest rates, more so than a slowing demand for goods and services that will trigger a recession.

While there is some merit to that argument, it overlooks a key point that I’ve made previously in this space: an inverted yield curve isn’t always just a symptom of recession; sometimes it’s a primary cause. The real damaging part of the inversion isn’t that investors have little confidence in the economy, but that banks and other lending institutions suffer real fiscal consequences when the yield curve inverts. With long-term interest rates lower than short-term rates, banks have to pay depositors more than they get back from borrowers. They lose their financial incentive to lend and end up tightening their underwriting standards and approving fewer loans. That affects home sales, car sales, business start-ups and a host of other areas crucial to economic growth.

So, with all due respect to those other experts, I disagree that “this time will be different.” At the end of the day, even if US growth were to remain strong but other economies around the world continued to struggle, we would ultimately feel the impact. Even if you’re the “cleanest dirty shirt” in the hamper, you’re still going to collect dirt off the other shirts. The bond market (which is said to be smarter than the stock market) knows this, and that’s just one reason why its most reliable recession warning signal—the inverted yield curve—is flashing red.

Ahead of the Curve

With all of this in mind, I believe we’re in a “sweet spot” right now for investors who haven’t yet reduced their stock market risk by switching their strategic focus from growth to income. Although the market has been volatile and trading sideways since early 2018, it still hasn’t started that major sustained drop that is likely to coincide with the next recession. There is still time to reduce your market exposure and avoid getting caught in the next downdraft. How much time? No one knows for sure, and the market may even eke out another new record high before the big drop begins. But is it worth risking a major loss in hopes of getting a minimal gain?

As I mentioned in last month’s newsletter, the current environment also creates a good opportunity for Income Specialists to demonstrate why investing-for-income is a sound strategy regardless of market conditions. While overall low interest rates do make it challenging to get good competitive yields, rest assured that I and other advisors who specialize in active management are making the strategic adjustments necessary to meet that challenge on behalf of our clients. That’s the beauty of the income model: it isn’t based on crossing your fingers and hoping for growth; it’s based on real strategies that can be modified and amended to keep you ahead of the curve—even when the curve inverts!