Will a Staggering Stock Market Find its Legs or is it Already KO’d? 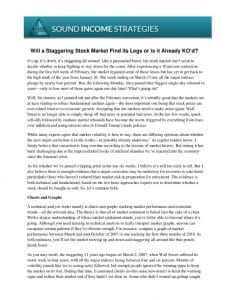 It’s up, it’s down, it’s staggering all around. Like a pummeled boxer, the stock market can’t seem to decide whether to keep fighting or stay down for the count. After experiencing a 10 percent correction during the first full week of February, the market regained some of those losses but has yet to get back to the high mark of the year from January 26. The week ending on March 23 saw all the major indexes plunge by nearly four percent. But, the following Monday, they posted their biggest single-day rebound in years—only to lose most of those gains again one day later! What’s going on?

Well, for starters, as I pointed out just after the February correction, it’s actually good that the markets are at least starting to reflect fundamental realities again—the most important one being that stock prices are overvalued relative to economic growth. Accepting that the markets need to make sense again, Wall Street is no longer able to simply shrug off bad news or potential bad news. In the last few weeks, quick sell-offs followed by cautious partial rebounds have become the norm, triggered by everything from fears over inflation and rising interest rates to Donald Trump’s trade policies.

While many experts agree that market volatility is here to stay, there are differing opinions about whether the next major correction is in the works—or possibly already underway.1 As regular readers know, I firmly believe that correction is long overdue according to the lessons of market history. But timing it has been challenging due to the unprecedented levels of artificial stimulus we’ve injected into the economy since the financial crisis.

As for whether we’ve passed a tipping point in the last six weeks, I believe it’s still too early to tell. But I also believe there is enough evidence that a major correction may be underway for investors to take heed, particularly those who haven’t reduced their market risk in preparation for retirement. The evidence is both technical and fundamental, based on the two basic approaches experts use to determine whether a stock should be bought or sold. So, let’s examine both.

A technical analysis looks mainly at charts and graphs tracking market performance and economic trends—all the relevant data. The theory is that all of market sentiment is baked into the cake of a chart. With a clearer understanding of where market sentiment stands, you’re better able to forecast where it’s going. Although you need training in technical analysis to really interpret market graphs, anyone can recognize certain patterns if they’re obvious enough. For instance, compare a graph of market performance between March and mid-October of 2007 to one tracking the first three months of 2018. In both instances, you’ll see the market moving up and down and staggering all around like that punch-drunk boxer.

As you may recall, the staggering 11 years ago began on March 2, 2007, when Wall Street suffered its worst week in four years, with all the major indexes losing between four and six percent. Months of volatility (much like we’re seeing now) followed, but enough people ignored the warning signs to keep the market on its feet. During that time, I cautioned clients (in this same newsletter) to heed the warning signs and reduce their market risk if they hadn’t yet done so. Some who didn’t wound up getting caught

in the downdraft when the second major correction since 2000 eventually took hold on October 9, 2007, with the market plunging by 53.7 percent over the next 18 months.

Even if you’re skeptical of the technical evidence, consider what fundamental market analysts are reporting these days. Fundamental analysts look beyond the graphs and focus on the influencing data. Specifically, they look at three types of financial statements that every company must share: their balance sheet, income statement, and cash-flow statement. Using these, they compare the company’s data to that of its competitors within the same industry. They also do year-to-year comparisons of each company’s financials to see how they’re trending.

One key piece of data fundamentalists look at closely is the price-to-earnings (P/E) ratio, which I’ve written about many times in this space. P/E ratios are a crucial component in gauging whether the markets make sense—and a fundamental analysis reveals that they currently still don’t. Consider that the stock market grew by about 20 percent in 2017 while, according to the Bureau of Economic Analysis, real GDP growth for the year was just 2.3 percent. Given that disparity, the trailing P/E ratio for the S&P 500 right now is about 22.

As I’ve explained before in this space, there are only two potential ways for the markets to make fundamental sense again when P/E ratios are this high and out of whack with economic reality: 1) by corporate profits quickly catching up with overinflated stock prices (which very rarely happens) or 2) by prices shrinking back down to align with profits.

According to the evidence, this cycle still has several years and at least one more major market correction to go. Even if that correction hasn’t already begun, I would say that based on the evidence, anyone betting that this staggering market will go the distance is playing a long shot.

1. Mark Decambre, “The stock market is on the brink of an absolute breakdown,” – MarketWatch, last modified on March 27, 2018, https://www.marketwatch.com/story/dows-surge-belies-fact-that-stock-market-is-on-the-brink-of-an-absolute-breakdown-2018-03-26