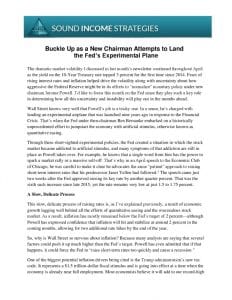 The dramatic market volatility I discussed in last month’s newsletter continued throughout April as the yield on the 10-Year Treasury rate topped 3 percent for the first time since 2014. Fears of rising interest rates and inflation helped drive the volatility along with uncertainty about how aggressive the Federal Reserve might be in its efforts to “normalize” monetary policy under new chairman Jerome Powell. I’d like to focus this month on the Fed since they play such a key role in determining how all this uncertainty and instability will play out in the months ahead.

Wall Street knows very well that Powell’s job is a tricky one. In a sense, he’s charged with landing an experimental airplane that was launched nine years ago in response to the Financial Crisis. That’s when the Fed under then-chairman Ben Bernanke embarked on a historically unprecedented effort to jumpstart the economy with artificial stimulus, otherwise known as quantitative easing.

Through these short-sighted experimental policies, the Fed created a situation in which the stock market became addicted to artificial stimulus, and many symptoms of that addiction are still in place as Powell takes over. For example, he knows that a single word from him has the power to spark a market rally or a massive sell-off. That’s why in an April speech to the Economic Club of Chicago, he was careful to make it clear he advocates the same “patient” approach to raising short-term interest rates that his predecessor Janet Yellen had followed.1 The speech came just two weeks after the Fed approved raising its key rate by another quarter percent. That was the sixth such increase since late 2015, yet the rate remains very low at just 1.5 to 1.75 percent.

This slow, delicate process of raising rates is, as I’ve explained previously, a result of economic growth lagging well behind all the efforts of quantitative easing and the overzealous stock market. As a result, inflation has mostly remained below the Fed’s target of 2 percent—although Powell has expressed confidence that inflation will hit and stabilize at around 2 percent in the coming months, allowing for two additional rate hikes by the end of the year.

So, why is Wall Street so nervous about inflation? Because many analysts are saying that several factors could push it up much higher than the Fed’s target. Powell has even admitted that if that happens, it could force the Fed to “raise short-term rates too quickly and cause a recession.”

One of the biggest potential inflation drivers being cited is the Trump administration’s new tax code. It represents a $1.5 trillion-dollar fiscal stimulus and is going into effect at a time when the economy is already near full employment. Most economists believe it will add to our record-high

federal deficit, despite the Trump administration’s insistence that the tax cuts will pay for themselves with 3 to 4 percent GDP growth.

The Fed, itself, would seem to be skeptical about that level of growth. In a statement following their March meeting, they slightly raised their forecast for 2018 GDP growth from 2.5 to 2.7 percent and increased the 2019 expectation from 2.1 percent to 2.4 percent. However, they projected that growth is likely to cool further after that, with the 2020 forecast holding at 2 percent and the longer-run measure at just 1.8 percent.2

Tied to all the inflation worries, of course, are fears over rising long-term interest rates. As mentioned, the 10-Year Treasury rate finally broke above 3 percent in April. That rattled Wall Street even though many experts believe long-term rates are going to have a very tough time notching up much higher than 3 percent for a variety of reasons.3

This is a very crucial point because I believe the stock market will continue to respond dramatically to the mere prospect of high inflation and rising interest rates. Although, some in the industry—myself included—believe those fears are largely unwarranted because they overlook important details.

The fear of the new tax code as an inflation driver is a perfect example. It’s based on the assumption that because Americans have more money in their paychecks, they’re automatically going to spend it on goods and services, increasing demand and driving up prices. But, that assumption overlooks one key detail: one of the nation’s largest demographics is the Baby Boomer generation. Ever since getting burned by two major stock market crashes in the last 18 years, they’ve been more focused on saving than spending.

Also, don’t forget that Trump’s promise of 4 percent GDP growth has already been priced into the stock market based on optimism. So, even if he manages to deliver, the best the stock market could probably do is stabilize or notch just slightly higher. And, again, the Fed’s growth projections for the next few years are well below 4 percent, which means if growth doesn’t rise to meet the overpriced market, the market may finally have to shrink to align with growth.

In addition to continued low inflation, I believe there are several other factors that will work to help keep long-term interest rates stabilized at or near 3 percent, as I’ve explained in previous newsletters. One is that a flight to quality will continue among nervous investors moving from the uncertainty of the stock market toward the relative security of bonds. Another is that foreign investors will continue to favor U.S. Treasuries over foreign bonds that have lower returns and carry higher default risks. A third is that Baby Boomers will continue to favor bonds and bond-like instruments over riskier stocks as they make the switch from investment strategies focused on growth to those focused on income.

The bottom line is that the Wall Street bean counters are looking at the situation only mathematically, and that’s what’s driving all the fears about inflation and interest rates. But, it doesn’t even matter if those fears are overblown because the fear itself will continue to drive

market volatility! That’s how emotion has created a real impact in the financial markets; even if enough people only say inflation is a big deal, it becomes a big deal!

In the end, the most important thing to keep in mind as Jerome Powell and the Fed attempt to land their experimental airplane amid this turbulence and uncertainty is that we are all passengers on this plane. In other words, buckle up!