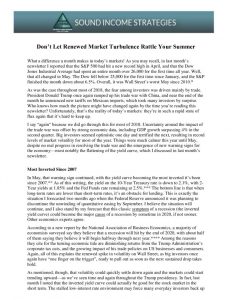 What a difference a month makes in today’s markets! As you may recall, in last month’s newsletter I reported that the S&P 500 had hit a new record high in April, and that the Dow Jones Industrial Average had spent an entire month over 26,000 for the first time all year. Well, that all changed in May. The Dow fell below 25,000 for the first time since January, and the S&P finished the month down about 6.5%. Overall, it was Wall Street’s worst May since 2010.*

As was the case throughout most of 2018, the fear among investors was driven mainly by trade. President Donald Trump once again ramped up his trade war with China, and near the end of the month he announced new tariffs on Mexican imports, which took many investors by surprise. Who knows how much the picture might have changed again by the time you’re reading this newsletter? Unfortunately, that’s the reality of today’s markets: they’re in such a rapid state of flux again that it’s hard to keep up.

I say “again” because we did go through this for most of 2018. Uncertainty around the impact of the trade war was offset by strong economic data, including GDP growth surpassing 4% in the second quarter. Big investors seemed optimistic one day and terrified the next, resulting in record levels of market volatility for most of the year. Things were much calmer this year until May, despite no real progress in resolving the trade war and the emergence of new warning signs for the economy—most notably the flattening of the yield curve, which I discussed in last month’s newsletter.

In May, that warning sign continued, with the yield curve becoming the most inverted it’s been since 2007.** As of this writing, the yield on the 10-Year Treasury rate is down to 2.1%, with 2-Year yields at 1.85% and the Fed Funds rate remaining at 2.5%.*** The bottom line is that when long-term rates are lower than short-term rates, it’s an obstacle for lending. This is exactly the situation I forecasted two months ago when the Federal Reserve announced it was planning to discontinue the unwinding of quantitative easing by September. I believe the situation will continue, and I also stand by my forecast that this classic symptom of a recession (the inverted yield curve) could become the major cause of a recession by sometime in 2020, if not sooner. Other economics experts agree.

According to a new report by the National Association of Business Economics, a majority of economists surveyed say they believe that a recession will hit by the end of 2020, with about half of them saying they believe it will begin halfway through next year.**** Among the reasons they cite for the turning economic tide are diminishing returns from the Trump Administration’s corporate tax cuts, and the growing impact of his trade policies on US businesses and consumers. Again, all of this explains the renewed spike in volatility on Wall Street, as big investors once again have “one finger on the trigger”, ready to pull out as soon as the next sustained drop takes hold.

As mentioned, though, that volatility could quickly settle down again and the markets could start trending upward—as we’ve seen time and again throughout the Trump presidency. In fact, last month I noted that the inverted yield curve could actually be good for the stock market in the short term. The stalled low-interest rate environment may force many everyday investors back up

the risk curve and into the market, and prompt corporations to continue increasing their use of stock buybacks. Those drivers could expand the equity bubble further in 2019, but I believe the odds of the market regaining its previous peak and climbing higher from there are increasingly slim, given all the factors at play.

So, what does it all mean for everyday investors? Well, if you’ve already made the shift to actively-managed financial strategies focused on protection and income, it doesn’t mean much. In fact, you barely have to think about it. That’s exactly the point of investing-for-income: it reduces your risk even in highly uncertain, rapidly changing times like now. That’s the core of active management: it ensures that Income Specialists will work to maximize your income return even in a challenging interest rate environment like the current one.

If, on the other hand, you’re not sure that you’ve sufficiently reduced your risk, or made changes recently that can help maximize your return even further, now is a great time to do so, not only because market volatility and recession fears have spiked again, but also because it’s now summer. If you’re like most people, you’re looking forward to a nice relaxing summer, as free from worry and uncertainty as possible. A single meeting with your advisor before your vacation could dramatically increase your odds of achieving that goal. If you have friends or loved ones you think might benefit from that message, by all means share this newsletter with them! This may well be a year when the old Wall Street adage “Sell in May and Go Away” turns out to be great advice.

Have a great summer!