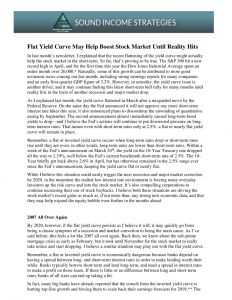 In last month’s newsletter, I explained that the recent flattening of the yield curve might actually help the stock market in the short-term. So far, that’s proving to be true. The S&P 500 hit a new record high in April, and for the first time this year the Dow Jones Industrial Average spent an entire month over 26,000.* Naturally, some of this growth can be attributed to more good economic news coming out last month, including strong earnings reports for many companies and an early first-quarter GDP figure of 3.2%. However, in actuality, the yield curve issue is another driver, and it may continue fueling this latest short-term bull rally for many months until reality hits in the form of another recession and major market drop.

As I explained last month, the yield curve flattened in March after a misguided move by the Federal Reserve. On the same day the Fed announced it will not approve any more short-term interest rate hikes this year, it also announced plans to discontinue the unwinding of quantitative easing by September. The second announcement almost immediately caused long-term bond yields to drop—and I believe the Fed’s actions will continue to put downward pressure on long-term interest rates. That means even with short-term rates only at 2.5%, a flat or nearly flat yield curve will remain in place.

While I believe this situation could easily trigger the next recession and major market correction by 2020, in the meantime the stalled low-interest rate environment is forcing many everyday investors up the risk curve and into the stock market. It’s also compelling corporations to continue increasing their use of stock buybacks. I believe both these situations are driving the stock market’s recent gains as much as, if not more than, any strong new economic data, and that they may help expand the equity bubble even further in the months ahead.

By 2020, however, if the flat yield curve persists as I believe it will, it may quickly go from being a classic symptom of a recession and market correction to being the main cause. As I’ve said before: this feels a lot like 2007 all over again. Back then, we knew about the sub-prime mortgage crisis as early as February, but it took until November for the stock market to really take notice and start dropping. I believe a similar situation may play out with the flat yield curve.

Remember, a flat or inverted yield curve is economically dangerous because banks depend on having a spread between long- and short-term interest rates in order to make lending worth their while. Banks typically borrow short-term and lend long-term, and need a spread in interest rates to make a profit on those loans. If there is little or no difference between long and short-term rates, banks of all sizes can end up taking a hit.

In fact, many big banks have already reported that the crunch from the inverted yield curve is hurting top-line growth and forcing them to scale back their earnings forecasts for 2019.** The

impact on smaller regional banks might end up being even worse, because most have less types of financial services to fuel their revenue streams. They depend on things like home and auto loans, and on having a yield curve steep enough to make money off them.

With a flat yield curve, many smaller banks end up tightening their underwriting standards and approving fewer loans. Naturally, that’s bad not only for the bank, but for the whole economy, and can start a domino effect toward recession. Fewer homes and cars are purchased, consumers start spending less, production falls with decreased demand, companies start laying off…on it goes. That’s how I believe this flat yield curve could quickly go from being symptom of a coming recession to being a major cause. Naturally a recession would be the worst possible news for the stock market, which dropped by nearly 60% in conjunction with the last recession.

‘This Time Will Be Different’

Now, it’s possible you’ve heard or read some opinions in recent weeks about the inverted yield curve that have downplayed its significance. I have too, and can tell you that most of these arguments fall into a familiar category for financial journalism: “this time will be different.” It’s the same message you hear touted by much of the financial media whenever warning signs are mounting that the next recession and major stock market correction might be around the corner.

Make no mistake: historically speaking, a flat or inverted yield curve is one of the most consistently reliable of those warning signs. According to one study by the San Francisco Fed, an inverted yield curve has preceded all nine recessions that have occurred since 1955. In each case, the recession hit in the following 6 to 24 months of the yield curve’s inversion.***

Naturally, the analysts arguing that “this time will be different” always have plenty of data to support their argument. Some of it may even sound reasonable and make sense analytically. However, as I discussed in last month’s newsletter, it’s always important to make sure you don’t get so caught up in data and left-brained analysis that you ignore common sense. Common sense is what might prompt you to ask: how likely is it that this time will really be different, if each of the last nine times in the past 64 years have all been the same?

*MarketWatch.com **“Bank Investors Face a Conundrum in an Inverting Yield Curve,” Yahoo Finance, April 23, 2019 ***“One of the Most Important Recession Warning Indicators is Beginning to Flash,” slate.com, March 26, 2019