How Investing for Income is a ‘Permission Slip’ to Enjoy Retirement 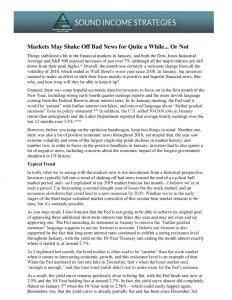 There’s a question that sometimes comes up regarding my income-based approach to retirement planning that I’d like to address in a couple of different ways. The question is basically this: what if I don’t need more income? That’s simplifying it a bit, but there are instances in which I’ll help a couple assess their income needs, and it appears they’ll be able to meet those needs without changing their portfolio to focus more on protection and income.

I stress “appears” because obviously there are no guarantees when it comes to investing, and circumstances can change dramatically—especially in today’s unprecedented age of economic uncertainty. That, in fact, is the first point I make when addressing the original question: investing for income isn’t just about protection; it’s about overprotection. It’s about having an extra layer of security against the kinds of major market drops that have devastated investors twice so far this century, and against the risk of cannibalizing your portfolio when it comes time to take your required minimum distributions or pay for a major medical event.

That extra layer of security exists with the investing for income model because it shifts the focus of your total investment returns from growth (which comes in the form of capital appreciation) to income (which comes in the form of interest and dividends). While capital appreciation depends on market growth (which sometimes turns to shrinkage), the income portion of your total return is, with the right strategies, achievable at the same competitive rates regardless of market conditions.

In other words, overprotection is possible without sacrificing return. Investing for income is simply an alternative way to get a competitive return with less risk. Thus, my first response when faced with the question, “What if I don’t need more income?” is to ask a question of my own: “If you can achieve that same level of return with less risk, doesn’t it make sense to do so now that you’re retired or near retirement?”

Some people see the practicality and common sense in that idea right away, and quickly take steps to lower their risk. Others may see the sense, but they don’t feel emotionally driven to act. Change of any kind is daunting and a little scary, and it’s rarely motivated by logic alone. Emotion is what really drives the decision-making process. So, with that in mind, here’s a little story I sometimes share with people who feel they “don’t need more income” that helps motivate them emotionally to make a change.

Recently, I stumbled across a classic car auction where I saw many iconic models from the 1970s being sold for between $40,000 and $70,000. It occurred to me that these were the same cars many men my age probably dreamed about owning when they were in high school. Then I asked myself: how many of these same men would likely feel comfortable spending that much money on their dream car now, even if they had a sizeable portfolio? The answer, I realized, was not many—and the reason was probably that most of them were invested in traditional financial strategies that didn’t allow them to see their retirement income as a renewable resource.

Put yourself in the place of one of these men and think about it: if you had $500,000 in a mutual fund and it went up, you might feel happy; but would you be likely to sell shares to make an impulsive major purchase, like a restored ’72 Mustang convertible? Probably not, because you’d realize that right after you sold those shares, the market might go up, and that withdrawal might never be recovered. Consequently, your wife might be a little upset with you! You’d realize, in other words, that your mutual fund is not a renewable resource.

Now, by contrast, think about that same $500,000 invested in bonds and bond-like instruments, reliably generating $25,000 in income this year and every year for the life of the bond. Think about the fact that your $500,000 is guaranteed to be returned to you if you hold the bond to maturity and there is no default. Now think about this: in just two years, this investment could have generated enough income for you to buy your dream car in cash! In other words, it would be like having a permission slip from your wife to spend the money because you’d both know that, with this strategy, the income is a renewable resource, much like wind or solar power.

Now, if you’re the wife in this situation, you might get the same kind of permission slip from your husband to buy a new kitchen or take a big trip with your grandchildren. The point is, by making income a renewable resource, income-based strategies can give retirees permission to do what they want financially, not just what they think they need to do. For many people, that realization can be emotionally powerful.

By the same token, investing for income offers people a way to better enjoy their income with a clear conscience and peace of mind. That’s based on the psychological reality that most people won’t change their goals or plans when faced with good financial news, but they will change them when faced with bad news. For example, a $500,000 mutual fund increasing by $250,000 probably wouldn’t change your life or motivate you to take a big trip; but that account dropping by the same amount might—indeed—prompt you to curb your spending or even cancel an expensive trip or major purchase. That’s true even if the trip was already set to be paid for with income generated through Social Security or a pension, and really had nothing to do with the savings account. It’s simply human nature: psychologically, you would still feel compelled to be cautious. Even if you did take the trip, you probably wouldn’t enjoy it as much because you’d simply “feel poorer” as a result of the reverse wealth effect.

So, if you have friend or loved one who feels they “don’t need more income” but may still be carrying too much risk in their portfolio, I encourage you to share some of this information. Explain that investing for income is not just a way to ensure you’ll have the income you need to meet your retirement goals, it can also be a “permission slip” to enjoy that income with a clear conscience!