Whether Intentional or Not, Fed’s Flattening of the Yield Curve is Bad News 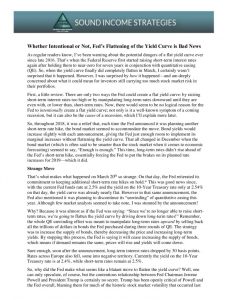 As regular readers know, I’ve been warning about the potential dangers of a flat yield curve ever since late 2016. That’s when the Federal Reserve first started raising short-term interest rates again after holding them to near-zero for seven years in conjunction with quantitative easing (QE). So, when the yield curve finally did completely flatten in March, I certainly wasn’t surprised that it happened. However, I was surprised by how it happened—and am deeply concerned about what it could mean for investors still carrying too much stock market risk in their portfolios.

First, a little review. There are only two ways the Fed could create a flat yield curve: by raising short-term interest rates too high or by manipulating long-term rates downward until they are even with, or lower than, short-term rates. Now, there would seem to be no logical reason for the Fed to intentionally create a flat yield curve; not only is it a well-known symptom of a coming recession, but it can also be the cause of a recession, which I’ll explain more later.

So, throughout 2018, it was a relief that, each time the Fed announced it was planning another short-term rate hike, the bond market seemed to accommodate the move. Bond yields would increase slightly with each announcement, giving the Fed just enough room to implement its marginal increases without flattening the yield curve. That all changed in December when the bond market (which is often said to be smarter than the stock market when it comes to economic forecasting) seemed to say, “Enough is enough.” This time, long-term rates didn’t rise ahead of the Fed’s short-term hike, essentially forcing the Fed to put the brakes on its planned rate increases for 2019—which it did.

That’s what makes what happened on March 20th so strange. On that day, the Fed reiterated its commitment to keeping additional short-term rate hikes on hold.* This was good news since, with the current Fed funds rate at 2.5% and the yield on the 10-Year Treasury rate only at 2.54% on that day, the yield curve was already nearly flat. However in that same announcement, the Fed also mentioned it was planning to discontinue its “unwinding” of quantitative easing this year. Although few market analysts seemed to take note, I was stunned by the announcement!

Why? Because it was almost as if the Fed was saying: “Since we’re no longer able to raise short-term rates, we’re going to flatten the yield curve by driving down long-term rates!” Remember, the whole QE unwinding effort was meant to manipulate long-term rates upward by selling back all the trillions of dollars in bonds the Fed purchased during three rounds of QE. The strategy was to increase the supply of bonds, thereby decreasing the price and increasing long-term yields. By stopping this process, the Fed is saying it will cease increasing the supply of bonds, which means if demand remains the same, prices will rise and yields will come down.

Sure enough, soon after the announcement, long-term interest rates dropped by 30 basis points. Rates across Europe also fell, some into negative territory. Currently the yield on the 10-Year Treasury rate is at 2.4%, while short-term rates remain at 2.5%.

So, why did the Fed make what seems like a blatant move to flatten the yield curve? Well, one can only speculate, of course, but the contentious relationship between Fed Chairman Jerome Powell and President Trump is certainly no secret. Trump has been openly critical of Powell and the Fed overall, blaming them for much of the historic stock market volatility that occurred last

year. Could the creation of a flat yield curve be payback; a way to dramatically increase the risk of a recession and major stock market crash ahead of the 2020 elections?

Well, I’m not one for conspiracy theories, but even if I were, that explanation would sound far-fetched. I think it’s more likely that these incredibly smart people at the Fed have become so focused on reading data that they’ve lost sight of the Big Picture—which is not uncommon. Here’s an example:

In 1972, a famous accident occurred in the Florida Everglades. Eastern Airlines Flight 401 went down because its entire crew had become so focused on a burnt-out bulb on their landing gear indicator that they didn’t realize their autopilot had put the plane into a gradual descent. By the time they did notice, it was too late. Despite all their training and intelligence, they were too focused on reading one gauge to notice the bigger problem.

I think that may be a fitting analogy for what’s happening with the Fed. They’ve become so focused on data and details (and so comfortable with the idea that they can artificially manipulate anything) that they’ve lost sight of the bigger picture. They’re so caught up reading their charts, graphs, and dot-plots that they’ve forgotten to simply look out the window and, metaphorically speaking, fly the plane.

That concerns me because with the yield curve now flat, “the plane” may already be in a descent. Yes, there may be some aspects of the flat yield curve that actually create a temporary spike for the stock market, but long-term the situation is perilous. As I’ve explained many times, banks need a spread in interest rates in order to make money on loans. Without it, odds are they’ll have to tighten up their underwriting standards and lend less money. When that happens, a domino effect toward recession usually isn’t far behind. Fewer homes and cars are purchased, people start spending less, companies start laying off, and on it goes. That’s how this flat yield curve could quickly change from a symptom of a possible recession to a major cause.

Naturally, a recession would be the worst possible news for the stock market, and with the third major sustained drop of our current secular bear market cycle still to come, it could be very bad news for investors over 50 who haven’t yet reduced their stock market risk!