Occasional Strong Headwinds for Fixed Income are Nothing New 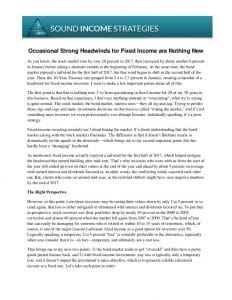 As you know, the stock market rose by over 20 percent in 2017, then increased by about another 6 percent in January before taking a dramatic tumble at the beginning of February. At the same time, the bond market enjoyed a tailwind for the first half of 2017, but that wind began to shift in the second half of the year. Then, the 10-Year Treasury rate jumped from 2.4 to 2.7 percent in January, creating somewhat of a headwind for fixed-income investors. I want to make a few important points about all of this.

The first point is that this is nothing new. I’ve been specializing in fixed income for 20 of my 30 years in this business. Based on that experience, I don’t see anything unusual or “concerning”; what we’re seeing is quite normal. The stock market, the bond market, interest rates—they all zig and zag. Trying to predict those zigs and zags and make investment decisions on that basis is called “timing the market,” and it’s not something most investors (or even professionals) ever attempt because, statistically speaking, it’s a poor strategy.

Fixed-income investing certainly isn’t about timing the market. It’s about understanding that the bond market (along with the stock market) fluctuates. The difference is that it doesn’t fluctuate nearly as dramatically on the upside or the downside—which brings me to my second important point: this has hardly been a “damaging” headwind.

As mentioned, fixed income actually enjoyed a tailwind for the first half of 2017, which helped mitigate the headwind that started building after mid-year. That’s why investors who were with us from the start of the year still ended up even on their values at the end of the year and ahead by about 5 percent on average with earned interest and dividends factored in. In other words, the conflicting winds canceled each other out. But, clients who came on around mid-year, as the tailwind shifted, might have seen negative numbers by the end of 2017.

However, at this point, even those investors may be seeing their values down by only 2 to 5 percent or so (and, again, that loss is either mitigated or eliminated with interest and dividends factored in). To put that in perspective, stock investors saw their portfolios drop by nearly 50 percent in the 2000 to 2002 correction and almost 60 percent when the market fell again from 2007 to 2009. That’s the kind of loss that can really be damaging for someone who is retired or within 10 to 15 years of retirement, which, of course, is one of the major reasons I advocate fixed income as a good option for investors over 50. Logically speaking, a temporary 2 to 5 percent “loss” is certainly preferable to the alternative, especially when you consider that it is—in fact—temporary, and ultimately not a real loss.

That brings me to my next two points: 1) the bond market tends to get “oversold” and then have a pretty quick partial bounce back, and 2) with fixed-income investments, any loss is typically only a temporary loss, and it doesn’t impact the investment’s main objective, which is to generate reliable retirement income at a fixed rate. Let’s take each point in order:

Following Donald Trump’s election in November 2016, the 10-Year Treasury rate spiked pretty dramatically from about 1.8 percent to 2.6 percent within a month, which created a headwind at that time for fixed income. That headwind could potentially have spelled a 5 percent drop for fixed-income investors. But, because it leveled off by the start of 2017 and because we manage our portfolios defensively, our clients felt little if any impact on average.

The 10-Year hasn’t fallen below 2 percent since late 2016 and, as noted, it spiked pretty dramatically in January, helping to increase the latest headwind. It may continue rising for a while and could conceivably break above 3 percent soon. Considering all the factors at play, I believe that at that point (just above or below 3 percent), it will hit a pretty tough ceiling. Again, I’ve seen this before in my career: when rates start rising, there’s a knee-jerk reaction. That triggers a sell-off, and the bond market, as a whole, gets “oversold.” Then, suddenly, everything levels off again, and a portion of what was lost in the sell-off comes back.

The last point I want to stress is that to even compare fixed-income strategies and stock-based investing would be, in many ways, like comparing apples and oranges. That’s important to remember if friends or neighbors ever start bragging about “making a killing” in the stock market. They’re actually taking a very simplistic and short-term view of their investments. The reality is that, since 2000, thanks to two major market drops, stock-market investors have experienced an average annualized return of just over 5 percent, despite other temporary “killings” they may have made during that time.

That’s because when you’re focused on growth, it can quickly turn to shrinkage when the stock market starts to tumble—which, as of this writing, it has! A loss in that scenario is a real loss because you’re not investing by contract. When you’re focused on fixed income, however, a temporary drop in your portfolio’s bottom line is largely irrelevant because your principal is often contractually guaranteed against loss by the issuer if the investment is held to maturity. It’s also guaranteed by the issuer to generate income at a fixed rate regardless of fluctuations in the market. So, maybe you’re not temporarily “making a killing,” but you’re also not risking financial ruin—and your investments are serving their primary purpose!

Naturally, everyone wants their money to grow and increase in value whenever possible. Through active management, we strive to take advantage of every opportunity when the fixed-income winds are in our favor and mitigate losses when we’re facing headwinds. When favorable winds return (as they always do), any losses can often be recouped, and growth can continue. But, the most important point to keep in mind is that, regardless of any temporary headwinds, you can count on your assets to continue generating the income you need to enjoy retirement and achieve your goals—which is exactly what fixed-income investing is all about!