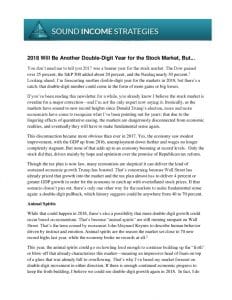 2018 Will Be Another Double-Digit Year for the Stock Market, But…

You don’t need me to tell you 2017 was a banner year for the stock market. The Dow gained over 25 percent, the S&P 500 added about 20 percent, and the Nasdaq nearly 30 percent.1 Looking ahead, I’m forecasting another double-digit year for the markets in 2018, but there’s a catch: that double-digit number could come in the form of more gains or big losses.

If you’ve been reading this newsletter for a while, you already know I believe the stock market is overdue for a major correction—and I’m not the only expert now saying it. Ironically, as the markets have soared to new record heights since Donald Trump’s election, more and more economists have come to recognize what I’ve been pointing out for years: that due to the lingering effects of quantitative easing, the markets are dangerously disconnected from economic realities, and eventually they will have to make fundamental sense again.

This disconnection became more obvious than ever in 2017. Yes, the economy saw modest improvement, with the GDP up from 2016, unemployment down further and wages no longer completely stagnant. But none of that adds up to an economy booming at record levels. Only the stock did that, driven mainly by hope and optimism over the promise of Republican tax reform.

Though the tax plan is now law, many economists are skeptical it can deliver the kind of sustained economic growth Trump has boasted. That’s concerning because Wall Street has already priced that growth into the market and the tax plan almost has to deliver 4 percent or greater GDP growth in order for the economy to catch up with overinflated stock prices. If that scenario doesn’t pan out, there’s only one other way for the markets to make fundamental sense again: a double-digit pullback, which history suggests could be anywhere from 40 to 70 percent.

While that could happen in 2018, there’s also a possibility that more double-digit growth could occur based on momentum. That’s because “animal spirits” are still running rampant on Wall Street. That’s the term coined by economist John Maynard Keynes to describe human behavior driven by instinct and emotion. Animal spirits are the reason the market set close to 70 new record highs last year, while the economy broke no records at all.2

This year, the animal spirits could go on howling loud enough to continue building up the “froth” or blow-off that already characterizes this market—meaning an impressive head of foam on top of a glass that was already full to overflowing. That’s why I’ve based my market forecast on double-digit movement in either direction. If there is enough continued economic progress to keep the froth building, I believe we could see double-digit growth again in 2018. In fact, I do

believe the momentum will continue in the beginning of the year; as to whether it continues the entire year is another question.

Of course, the more important question for investors near retirement is this: is it worth the risk when a double-digit drop is equally possible based on economic realities? In fact, according to some key details, the economy actually isn’t doing that much better than it was two years ago!

It was two years ago last month that I appeared on CNBC’s Closing Bell and shared my concerns about the Federal Reserve’s just-announced timeline for raising short-term interest rates. That show aired just as the Fed approved its first interest rate increase since lowering short-term rates to nearly zero in 2008, just before launching quantitative easing.

At the time, I said I was skeptical about the Fed’s goal of having short-term rates up to 2.5 percent by the end of 2017 for two reasons: First, it would strengthen the dollar and make it very difficult to hit their goal of 2 percent inflation. And second, raising short-term rates that high would mean that in order to avoid flattening the yield curve, long-term rates would also have to increase by at least 2 percent by the end of 2017—which I said was very unlikely to happen.

Well, guess what? Although the Fed has approved four additional rate hikes since that first one two years ago, the current Fed funds rate is still just in the range of 1.25 to 1.5 percent at the start of 2018, and the goal of 2.5 has been pushed back to the end of 2019.3 Why? For exactly the reasons I pointed out two years ago: inflation has mostly stayed below 2 percent, and long-term rates have not risen ahead of short-term rates enough to avoid risking a flat yield curve. The 10- Year Treasury rate was at 2.25 when I shared my doubts about it reaching 4 to 5 percent by the end of 2017. Today it is just at 2.47 percent.4

I’ve written a number of times about the importance of the yield curve. Keeping long and short-term rates separated by at least 2 percentage points is essential because banks depend on that gap to make lending worth their while. When the yield curve flattens, banks lose their financial incentive to lend, and businesses and consumers struggle to borrow. That’s not a recipe for economic growth, but just the opposite. It’s the kind of thing that could stall an economy completely, put an end to animal spirits and irrational exuberance, and finally force the stock market to make fundamental sense again with a major pullback.

I recently got another vivid example of how other economic experts are now recognizing the importance of some of the same details I’ve been focusing on all along. It happened when I tuned into a CNBC interview with one of the Federal Reserve’s regional presidents, who actually voted against their most recent rate hike. He explained his opposition by sharing some of the same concerns I shared on Closing Bell two years ago—including the risk of a flat yield curve!5

Just as I did, he explained how continuing to raise short-term rates while long-term rates are still low could bring the current course of economic improvement to a screeching halt. The interview made me realize that not only are those warning signs I saw two years ago still in place, but even a member of the Fed admits to being concerned about them today!