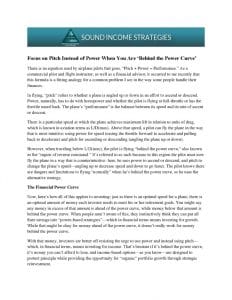 There is an equation used by airplane pilots that goes, “Pitch + Power = Performance.” As a commercial pilot and flight instructor, as well as a financial advisor, it occurred to me recently that this formula is a fitting analogy for a common problem I see in the way some people handle their finances.

In flying, “pitch” refers to whether a plane is angled up or down in an effort to ascend or descend. Power, naturally, has to do with horsepower and whether the pilot is flying at full-throttle or has the throttle eased back. The plane’s “performance” is the balance between its speed and its rate of ascent or descent.

There is a particular speed at which the plane achieves maximum lift in relation to units of drag, which is known in aviation terms as L/D(max). Above that speed, a pilot can fly the plane in the way that is most intuitive: using power for speed (easing the throttle forward to accelerate and pulling back to decelerate) and pitch for ascending or descending (angling the plane up or down).

However, when traveling below L/D(max), the pilot is flying “behind the power curve,” also known as the “region of reverse command.” It’s referred to as such because in this region the pilot must now fly the plane in a way that is counterintuitive: here, he uses power to ascend or descend, and pitch to change the plane’s speed—angling up to decrease speed and down to go faster. The pilot knows there are dangers and limitations to flying “normally” when he’s behind the power curve, so he uses the alternative strategy.

Now, here’s how all of this applies to investing: just as there is an optimal speed for a plane, there is an optimal amount of money each investor needs to meet his or her retirement goals. You might say any money in excess of that amount is ahead of the power curve, while money below that amount is behind the power curve. When people aren’t aware of this, they instinctively think they can put all their savings into “power-based strategies”—which in financial terms means investing for growth. While that might be okay for money ahead of the power curve, it doesn’t really work for money behind the power curve.

With that money, investors are better off resisting the urge to use power and instead using pitch—which, in financial terms, means investing for income. That’s because if it’s behind the power curve, it’s money you can’t afford to lose, and income-based options—as you know—are designed to protect principle while providing the opportunity for “organic” portfolio growth through strategic reinvestment.

The mistake many people make is thinking they can just “throw the throttle forward” with all their money and rely on risky growth-based options like stocks and mutual funds. That, of course, is the standard approach touted by many advisors and much of the financial media, but the problem with it is twofold. First, growth can quickly turn to shrinkage if the market drops, and when that happens the investor, who is focused on growth, can end up in big trouble. Equating it to flying, it’s similar to what can happen when a pilot impulsively throws the throttle forward to try to increase speed when he’s behind the power curve: he can send the plane into a spin, with devastating results.

The second problem is that the growth potential of an overvalued market, like the one we’re in now, is limited. Just as a pilot can’t increase his speed much by applying power when he’s behind the power curve, an investor typically can’t increase his return much by focusing on growth when the market is topped out; this is ignoring the fact that he’s also risking a potential 40 to 70 percent loss by chasing a 5 to 10 percent gain! Both the Dow Jones Industrial Average and S&P 500 recently hit new record highs, further disconnecting stock values from economic fundamentals and increasing the likelihood that the next major correction will be closer to 70 percent than 40.

If that sounds familiar, it’s probably because you’ve heard me discuss how investing for income is like “taking the road less traveled”, or how being a good investor requires being a contrarian since the concept of “buy low, sell high” runs counter to most people’s instincts. For most people, when the market is low, their fear kicks in and that’s when they sell. Conversely, when the market is high their greed takes over and they’re reluctant to sell for fear of missing out on more growth.

With that in mind, is it possible that once the next major correction occurs and the market has bottomed out that it might be okay again to focus more on growth, even with money that’s “behind the power curve”? In other words, might it make sense to switch back from pitch to power and fly more normally? For some investors, depending on their situation, it is possible.

In the meantime, though, I believe using pitch instead of power (i.e. investing for income instead of growth) for money behind the power curve is a better way to ensure a safe, successful “flight” into retirement for many investors.