As Fall Nears, the Markets are a Messy Mix of Good, Bad & Ugly 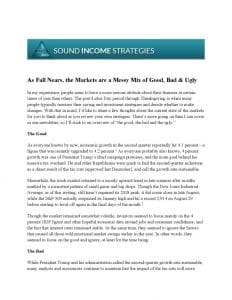 In my experience, people seem to have a more serious attitude about their finances at certain times of year than others. The post-Labor Day period through Thanksgiving is when many people typically reassess their saving and investment strategies and decide whether to make changes. With that in mind, I’d like to share a few thoughts about the current state of the markets for you to think about as you review your own strategies. There’s more going on than I can cover in one newsletter, so I’ll stick to an overview of “the good, the bad and the ugly.”

As everyone knows by now, economic growth in the second quarter reportedly hit 4.1 percent—a figure that was recently upgraded to 4.2 percent.1 As everyone probably also knows, 4 percent growth was one of President Trump’s chief campaign promises, and the main goal behind his massive tax overhaul. He and other Republicans were quick to hail the second-quarter milestone as a direct result of the tax cuts (approved last December), and call the growth rate sustainable.

Meanwhile, the stock market returned to a mostly upward trend in late summer after months marked by a consistent pattern of small gains and big drops. Though the Dow Jones Industrial Average, as of this writing, still hasn’t regained its 2018 peak, it did come close in late August, while the S&P 500 actually surpassed its January high and hit a record 2,914 on August 29 before starting to level off again in the final days of the month.2

Though the market remained somewhat volatile, investors seemed to focus mainly on the 4 percent GDP figure and other hopeful economic data around jobs and consumer confidence, and the fact that interest rates remained stable. At the same time, they seemed to ignore the factors that caused all those wild emotional market swings earlier in the year. In other words, they seemed to focus on the good and ignore, at least for the time being…

While President Trump and his administration called the second-quarter growth rate sustainable, many analysts and economists continue to maintain that the impact of the tax cuts will more likely be short lived, and that growth will shrink back closer to 2 percent—or lower—by next year. Many have doubled down on this stance based in part on early reports about what corporations have been doing so far with all their extra tax money.

A recent study by the National Employment Law Project and the Roosevelt Institute found that most corporations have used the money on stock buybacks, rather than direct investments into the company for things like technology, expansion or pay raises.3 While some experts contend buybacks are a viable strategy that can help ensure a company’s financial strength, others argue that buybacks ultimately hurt corporate America, hurt American workers, and could starve the economy of the very growth the tax cuts were intended to achieve.

Also falling into the “bad” category is the potentially troublesome relationship between President Trump’s tax plan and the federal deficit. From the start, analysts rejected President Trump’s argument that the tax cuts would “pay for themselves” and cautioned that such a drastic reduction in federal revenue would push the sky-high deficit even higher. Now, the White House has acknowledged that the deficit is growing faster than expected. In July, the Office of Management and Budget revised an earlier forecast to account for nearly $1 trillion of additional debt over the next decade.4

Complicating matters further, President Trump recently pledged up to $12 billion in federal emergency relief for farmers hurt by his trade war—which is another of the “bad” or potentially bad factors Wall Street seems to be ignoring lately. Though big investors may be taking a wait and see attitude, many real effects from the new tariffs are already being felt across the country in the form of closed plants and lost jobs. The U.S. Chamber of Commerce has said President Trump’s trade actions could lead to 2.6 million American job losses in total.5

For years now, I’ve been cautioning that we’re living in an unprecedented age of economic uncertainty—a result of the reckless overuse of experimental artificial stimulus policies by Central Banks around the world, starting with our own Federal Reserve. One could argue the Trump administration’s massive tax overhaul is yet another experimental effort. While there’s little argument it will boost growth in the short term, there is plenty of debate about whether it will sustain that growth or, instead, cause the federal deficit to finally spiral out of control.

There is just as much debate and controversy around President Trump’s trade policies. Will they make the U.S. more globally competitive and ultimately strengthen the economy? Or will they undermine his tax cuts, cripple growth and usher in a new recession that finally forces the stock market to make fundamental sense again (as it eventually must) with a 40 to 70 percent correction?

No one has a crystal ball, of course. But when reevaluating your own portfolio this fall, make sure you’re taking all these important details about today’s market into consideration. Make sure you’re not blindly focused on “the good” (as Wall Street seems to be), to the extent that you overlook “the bad” and “the ugly!”